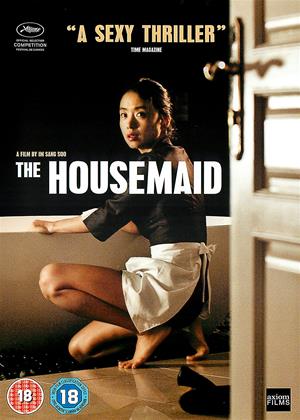 Reviews of The Housemaid

The Housemaid (aka Hanyo) review by Melissa Orcine - Cinema Paradiso

The film ‘The Housemaid’ is a Korean remake of director Kim Ki-young’s 1960 film of the same name. The updated version is from director Im Sang-soo . In it, a maid named Eun-yi (Jeon Do-yeon) is hired by an affluent family, in charge of a young girl whose mother is pregnant with twins. At first, Eun-yi’s tasks are easy enough, although there is a looming sense that nothing seems right in the modern-day mansion. When her male employer, the womanizing Hoon (Lee Jung-jae) seduces Eun-yi, she willingly submits to her master and thus starts a deadly dance that may or may not rip the family apart.

‘The Housemaid’ is a hyper-stylized psychological thriller oozing with erotica. The order of the house and minimalist colors of the film hide decrepitude beneath its sleek surface. The characters are the same – they too are not what they seem – and the viewer is reeled in to know what happens next.

Jeon Do-yeon as Eun-yi has the right amount of naivety, sexiness, and cunning that gives ‘The Housemaid’ a conflicted message. Here is a woman who is suddenly thrust into the world of the upper-crust, all glinting with money and power, but she soon realizes that even the rich and powerful have issues. Twisted issues at that.

One of the most interesting characters in ‘The Housemaid’ is its oldest house-servant, Byeong-sik – she has lived with the family the longest, knows the ins and outs, and its dark secrets. For the regular viewer, she may be just the lowly help but you’ll soon realize that she has the upper-hand. She knows everything and her intentions are unclear. She may have been with the family since forever but that doesn’t mean that’s where her loyalties lie.

Korean cinema has always been a hub for ingenious and extraordinary films. Their movie industry is alive and well, and has been garnering attention from international film festivals as of late. ‘The Housemaid’ is a fine example of their sheer creativity – controversial, sexy, conceptual, at times confusing, but totally thought-provoking.