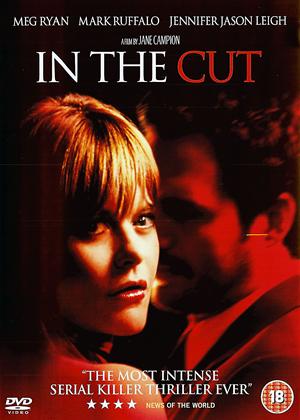 Synopsis:
Meg Ryan stars in this dark psychological thriller, where desire and death mix in the shadows of New York. Frannie (Meg Ryan) is a lonely but determined woman living alone in Manhattan, who becomes involved in an investigation, following the gruesome slaying of a young woman in her neighbourhood. It soon appears that she may know more about the murder than she thinks< after witnessing what could have been the prelude to the crime. Drawn to the homicide detective investigation the case, she discovers the dark side of passion when she embarks on a risky and turbulent affair with him.
But as the death toll rises, each victim getting closer to Frannie, she begins to wonder if her new lover is hiding a deadly secret!
Actors:
Meg Ryan, Mark Ruffalo, Jennifer Jason Leigh, Michael Nuccio, Allison Nega, Dominick Aries, Susan Gardner, Sharrieff Pugh, Nick Damici, Heather Litteer, Daniel T. Booth, Yaani King Mondschein, Frank Harts, Sebastian Sozzi, Zach Wegner, Patrice O'Neal, Funda Duval, Theo Kogan, Sandy Vital, Sharon Riggins
Directors:
Jane Campion
Writers:
Jane Campion, Susanna Moore
Studio:
20th Century Fox
Genres:
Thrillers

Doesn't Make The Cut - In the Cut review by CP Customer

It's almost a case of someone having a vague idea of what makes a thriller work but not having ever seen one before.

At no point did I beleive in her character or her attraction to the cop, particularily as her suspicions mount. The conclusion is utterly ridiculous, though I'm sure has symbolic meaning. Meta-themed thrillers are fine just so long as you care about the hero and can find humanity in their plight beyond the hidden meanings of the plot.

Phew what a scorcher - In the Cut review by JD

It has to be stated at the outset that this is a highly sexual film. But do not think that it is cheap, it is really gripping. The characters are immensely complex and very interesting. The plot (it is outwardly a detective film) is good. The drama spot on. Scoring such a violent and pornographic film with a 5 star I did for the dramatic impact and intensity of emotion not for any smutty motive. Definitely an 18 rated. Not for winding down to.

Disappointing - In the Cut review by CP Customer

I did not enjoy the film at all! Found it pretty boring, I have liked Meg Ryan in other films I have seen and I had been looking forward to watching her in this one!

Tasteless - In the Cut review by SC

This film was pornographic and focused largely on the main female character's sexual exploits or lack of,

Great film - In the Cut review by HC

Very dark and quite explicit but an excellent storyline, plenty of twists and good performances from the leads. Took me by surprise by I throughly enjoyed it.

Good thriller - In the Cut review by CP Customer

Slightly surprising role for Meg Ryan. I guess she wanted to break the mould of being type cast as romantic heroine. There are some moments where her part's behavior is not totally believable, but the plot kept me guessing right up to the end. I thought the gratuitously explicit sex was unnecessary to the plot, but I'm not complaining.