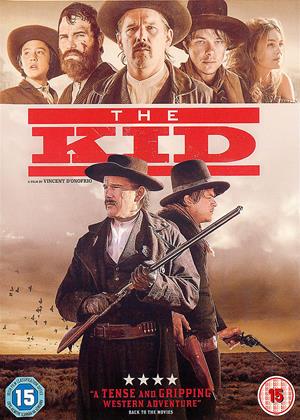 Actorly Western drama directed by actor Vincent D’Onofrio. Despite the concentration on performance, it holds the attention with a plot that sees a sister and her younger brother go on the run from their villainous uncle (Chris Pratt) after they kill their brutal father. They get help from Sheriff Pat Garret (Ethan Hawke) and his prisoner Billy the Kid (Dane DeHaan), with whom their lives become entwined. There’s little Western action, but it’s a well-observed and effectively shot film that makes for a watchable hour-and-a-half. Ethan Hawk especially gives a standout performance as Pat Garret and the tense final showdown between him and Chris (here playing his first villain) is worth the wait.

There’s an old-fashioned sensation to The Kid, a Western biopic that takes aim at the life of outlaw Billy The Kid. The look is great, feeling dirty and gritty for an era of outlaws on the dusty plains. The cast is astounding, including the likes of Ethan Hawke and Chris Pratt in unlikely roles. Even the shots are beautiful, making great use of the framing and showcasing an old west town. And, yet, there’s something missing here. An extra kick to make this Western shine past it predecessors. Rather than find a new route, director Vincent D’Onofrio merely straps on a worn saddle and takes a stroll down the same old trail.

This isn’t to say the film doesn’t have its own intensity, considering how solidly it weaves its old west drama. We meet a childhood pair of Rio Cutler (Jake Schur) and Sara (Leila George) facing a horrible situation with their parents. Dad has gone mad and murdered their mother, leading to Rio retaliating and killing his father. This angers his uncle Grant Cutler (Chris Pratt), who proceeds to hunt Rio and his sister down.

Rio feels like he’s on his own until he befriends Billy the Kid (Dane DeHaan). They hit it off well considering their common ground of having killed their fathers. Billy also has a pursuer in the form of Sheriff Pat Garrett (Ethan Hawke), a rather formidable foe considering it doesn’t take long for him to capture Billy. Whether he can keep Billy held captive is another story.

None of this is all that bad but this kind of film doesn’t leave much room for a greater exploration of Billy or the old west. There’s contentment for the film to mosey along in familiar stride as it whips up tense moments of shouting and showdowns. We’ve seen scenes like this before and while they’re never all that boring or dull, they don’t exactly say anything new. I enjoyed watching Hawke take charge as a wise Sheriff, a conflicted look in his eyes as he struggles to maintain order when he can feel it slipping. DeHaan has his charms as well as the criminal so cocky he can make pleas not to tell the Sheriff he has escaped and then become mildly annoyed that he has to shoot someone.

But the film never asks tougher questions about Billy or the Sheriff. There’s no time for contemplation about law and order when we’re locked in duels of gunslinging and hostages situations. It’s for this reason why these characters are simplified as it seems they have more to say with their actions than their words. This is what it comes off as when their dialogue feels more like dusted off cliches from older Western pictures.

The enjoyment of The Kid depends mostly on how much one longs for the simpler Westerns before they came all revisionist and neo. And the film certainly gets the job done, where you could easily place such a film within the 1960s. But as a film of the 2010s, it feels like there should be more to this picture than its mere throwback to Western theatrics and melodramatic lamentations of men grappling with justice.