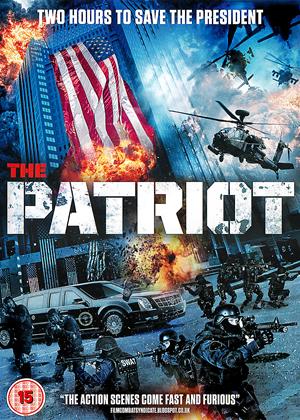 Synopsis:
One second he's chatting with a pretty girl. The next: FBI agents are breaking down his door! Meet Ryan Taylor (Tom Getty): a Marine framed for a deadly bombing. Tortured for information he doesn't have, the Marine must escape and hunt down the people who set him up. But in his pursuit he finds warning of an even greater attack - one that will end freedom for all nations.
Actors:
Curtis Caldwell, Tom Getty, Daniel Kuttner, Philip Lewis, Eamon McGee, Kirsten Meenan, Joel Neff, David Roush
Directors:
Tom Getty
Producers:
Tom Getty
Writers:
Tom Getty
Aka:
Rising Fear
Studio:
101 Films
Genres:
Action & Adventure

Reviews of The Patriot

The Patriot: written, produced, directed, edited, acted – basically a one man show – by Tom Getty. This isn’t to say that we should immediately give Tom credit without even valorizing his film, but what is also doesn’t mean is that we should bash his efforts without giving him the benefit of the doubt. So, let’s put it this way: where Shane Caruth succeeds with a minuscule budget (Primer, Upstream Color), Tom Getty falters instead. His efforts are well-alive and present, but they fall short in the major department that makes or breaks a film: a decent story.

The film starts off decently enough, grabbing your attention right from the get-go. Tom Getty is Ryan Taylor, a wrongfully accused marine who is also framed for a major terrorist attack as well. Suddenly, Ryan gets entangled in a web of deception, lies, political espionage, and potential terrorist double-crossing to serve as their scapegoat in a plot of a massive scale. This plot involves the president of the United States, who, if Ryan does not find out who the real people behind the mask are, is going to be executed (or even worse, killed by his own men to prevent additional collateral damage).

All of this sounds good on paper, but the poor editing, absolutely horrendous sound mixing, sound design, film volume (Getty’s film suffers from an overt “loudness”, which I guess has something to do with compressors and decibel thresholds), and lacking any sorts of narrative coherence due to all of the above, makes The Patriot borderline unwatchable. Again, this doesn’t have anything to do with Tom Getty’s one-man effort (which I wholeheartedly applaud), but rather the product that he is putting forward to the world. Now, I don’t doubt in the slightest that Tom is a very talented guy, with a knack for storytelling through film as a medium, but he probably needs some more practicing to nail at least one of the above-mentioned departments and improve his abilities as a filmmaker while doing it. Why not start with a proper script first? It costs absolutely nothing and it can be done from almost anywhere with a pen and paper, or even more convent – on your laptop as well.

Now, I can probably bash the film to no avail and back, but what would be the point of all of that besides belittling Tom? So instead, here are some pointers on how to do better next time:

Try to hire a sound engineer or at least someone who knows his way around threshold limits loudness, and the shape of sound;

There are countless unemployed film editors out there who are just looking for their big chance (YouTube is a great source of inspiration). Go ahead and hire a guy/girl who has a real passion for editing and work with them to produce a better version of your film idea;

Hire someone who knows what he’s doing with a camera, including angles, type of shots, etc. I’m sure that you can produce a decent-looking film by using an iPhone or other smartphone equivalent;

Thanks for tuning in and better luck next time!