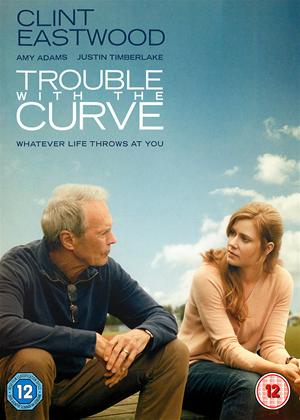 Reviews (2) of The Trouble with the Curve

Clint plays yet another 'grumpy old man' - an undemanding, very average film - The Trouble with the Curve review by RP

Is this Clint Eastwood's final film as actor? There's been a four year gap after 2008's excellent 'Gran Torino' so what can we expect from this iconic actor?

Well, Clint plays Clint in yet another 'grumpy old man' role - one that he has honed to perfection since 1992's 'Unforgiven'. But here he's not playing one of the age inappropriate roles that he has sometimes attempted but a real 'old man' part, gradually losing his sight from macular degeneration. He needs perfect sight in his job as a baseball scout but struggles on regardless using his vast experience - and eventually accepts help from his estranged daughter, played by Amy Adams.

As a Brit I can't get too excited by baseball, perhaps unfairly regarding it as a game of rounders played for money, so I didn't feel involved in the sport itself. But the film works quite well despite many clichés (experienced older man threatened by young upstart, obnoxious sports star, a complete unknown turns out to be the better performer, romance with member of the opposition, lazy Hollywood too-perfect ending etc). And this modest success is entirely down to Clint - his acting ability and the way he manages to dominate every scene where he's in front of the camera.

The supporting cast is a bit of a mixed bag: John Goodman was OK, Justin Timberlake OK as a likeable love interest for the weak Amy Adams. Ms Adams is the weakest link in the chain as Clint's on-screen daughter, a high-flying lawyer with an encyclopaedic knowledge of baseball. Unfortunately she didn't manage to convince me of either of these - and nor was I convinced by any of the other roles I've seen her in, for example as Lois Lane in 'Man of Steel'.

It's an undemanding film, a bit of a feelgood factor, but a weak effort for one of Mr Eastwood's offerings. 3/5 stars - it's not unlikeable, just very average.

Clint is a baseball scout who's sight is degenerating. Some of the board members are unsure of his antiquated scouting ways, ie, not using a computer and relying on seeing the player in person and looking at stats from his mountains of paperwork. John Goodman who is on the board has got his back and tries to convince his daughter Amy Adams to go with him on what could be his last scouting trip, as his contract is due to end. Adams is a highly successful lawyer about to become a partner in the firm, which she has worked her butt off for, so is reluctant at first.

Father and daughter obviously love each other very much, although there are questions that Adams wants answered from parts of her unhappy childhood. Maybe the scouting trip will be the time for feelings to be resolved. Of course it's never the right time for the miserable old grouch Clint.

Eastwood and Adams are superb as the father who cannot face his feelings and the daughter yearning for love.

Justin Timberlake is a very good actor and great at playing a young up and coming scout who develops the hots for Mickey (Adams).

Being Welsh I knew nothing about baseball , now though I know everything. No seriously, I enjoyed the technical part of baseball discussed and now know a little. Very nice film.