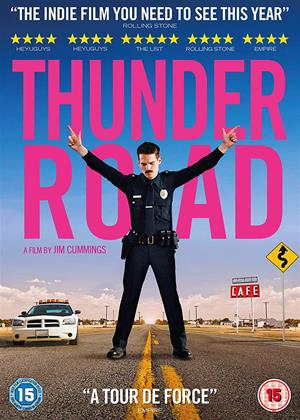 There’s a very delicate line that Thunder Road walks between deep sadness and quirky comedy. Jim Cummings (also the writer and director) stars as Jim Arnaud, a small-town cop who has dyslexia and severe heartbreak. We catch up with him at his worst, during the funeral of his mother. In remembrance of his mother who loved dancing, he seeks to perform a little routine but can’t get the music to work. And so he performs without music, doing an extremely poor job holding back the tears, turning into a blubbering mess.

There’s a constant questioning from the audience about how to digest a man as broken as Jim. On one hand, we sympathize with his plight where it seems like every aspect in life has let him down, despite his constant struggles to be good cop and person. He’s divorced from a very troubled woman and shares custody with his daughter that is coming into a troublesome age. He tries to talk to her openly and keep her on the straight and narrow but he’s not equipped for it. His frustrations continue to boil faster to the surface with every day that he explodes in certain scenarios, be it at the police force or when having a conference with his daughter’s teacher.

But there’s also a tinge of comedy, where there is an uncomfortable chuckle and Jim’s frankness in dealing with situations. He visits his mother’s grave and breaks down once more, commenting on the quality of graves in a manner that seems more like honesty than small talk. He has a heavy heart even in his most heated of moments. During one of his many long rants, he shouts back at the police department for how devalued he feels, breaking his accusations to thank one officer who brought him breakfast when he was sleeping in his car for the night in parking lot. It would seem like a bit played for a laugh but it’s almost a smile behind tears the way Jim says this with a very heartfelt way, not going for the easy laugh.

The more the film goes on with Jim’s tearful journey, where one bad thing after another seems to befall his life, my heart broke even more for this character that guzzles audience pity like a pro. He’s not only relatable as a typical mustached cop in how he handles crime situations but also as someone who feels cheated and struggles to recognize the world that has wronged him. He earns so much of love that by the time something finally goes right for him by the end, albeit via more tragedy, we feel for him. His emotional state is a rocky one but having people around him more inviting than stand-offish makes a big difference, where we can see more of ourselves in the supporting players if not Jim himself.

Thunder Road features many scenes that are staged almost like a play where Jim Cummings goes through many long takes of long dialogue that usually ends in tears. And for a character constantly crying, there’s a sympathy that carries over from what could’ve been an over-the-top role. This isn’t an easy feat to pull off when required to constantly be a sniffling mess on screen but Cummings has the right stuff to make us care for him while at the same time be amused by his genuine approach to his community.

By the end of the film, I felt the same way as Jim does nearly every day, my heart shredded into a million pieces and scraped up into a neat pile by the closing credits. There’s an oddness to its approach to tragedy and vulgarity that places the film in a camp all its own, unlike any picture I can think of off the top of my head. Sure, Cummings may have approached this production as a vanity project to showcase that more Oscar-worthy side of his acting but I’ll be damned if he doesn’t pull it off to an amazing degree with his film.