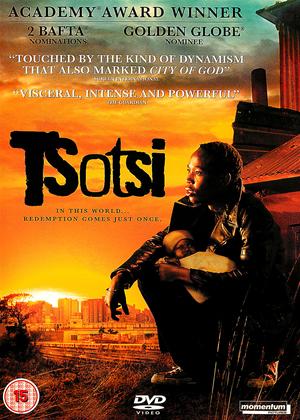 2 days In The Valley - Tsotsi review by CP Customer

It was during the hieght of Tarantino's 'Pulp Fiction' eera that '2 Days In The Valley' was released, and no doubt because of it.

The story consists of a number of characters whos lives intertwine by means of fate and coincidence and it does so with a splash of dark comedy in places, coupled with a personally emotional stuggle each character is working through.

The acting is superb by all. Charlize Theron (Monster) as James Spader's (Sex Lies And Video Tape)love interest, as deceitful and cunning as himself, both out to swindle Teri Hatcher (Superman series) out of her inheritance, despite the three initially being in on it. The dirty dealings thicken as Dosmo, played by Danny Aiello (Léon) is caught in the cross-hairs. There are also delightfully touching performances from characters such as Glenne Headley (Dick Tracy) who plays a shy assistant who's confidence has been cringingly dented by her boss Greg Crutwell (George of the Jungle) a successful and self loathing entrepreneur.

I could go on, with further sterling performances by the likes of Jeff Daniels (Dumb & Dumber) as the bitter cop, coupled with Eric Stoltz, (Fly 2) the keen new detective dreaming of furthering his career. The movie has a cache of great performances by all, and the direction by John Herzfeld (Don King: Only in America) mainly known for his TV work creates a stylish, condenced story that never teeters out.

A recommended watch by those who apreciate a layered story, slicky executed and doesnt over complicate itself.

life on the edge - Tsotsi review by CP Customer

After waiting a few months, I was not disappointed. The tale of South African Ghetto life was grim but realistic, and the emotional rollercoaster of the principal character was well acted. Rent it now!