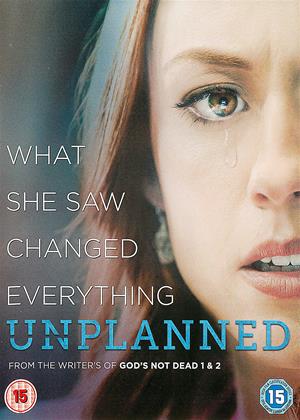 I couldn’t help but be reminded of when this film started up and the Pure Flix logo graced the screen just what this studio was aiming towards. Around this time, the evangelical Pure Flix decided to push their original Christian programming to their own streaming service, complete with a commercial from its founder touting their offerings as Christian-friendly content suitable for the family. But here we are with Unplanned, an R-rated film that decides to focus in on the controversial subject of abortion. You can pretty much guess where they fall on this issue and one can easily guess why this film was rated R (hint: it's not sex or profanity).

Though based on a memoir by Abby Johnson, Pure Flix does its best to exaggerate her story to properly fit the Christploitation format. If you’re not familiar with this subgenre, take a gander at the flagship film of this studio, God’s Not Dead. The goal is to showcase that Christian values are deeply under attack in America, but also present their religion as one of hope that can weather whatever cultural storm is tossed towards it.

Abby is the perfect kinda person for a Pure Flix biopic. She was the director of a Planned Parenthood operation that oversaw thousands of abortions. She even went so far as to be an activist fighting for legislation for her pro-choice views. But after seeing so many abortions, Abby simply can’t take no more. She becomes religious, starts a new relationship, and finds herself pregnant. She can’t bring herself to keep doing her abortion work and not only resigns, but devotes her views to pro-life by actively trying to get abortionists to quit their jobs, even celebrating the closure of her clinic.

Defenders of this film would cite that it’s a true story and thus an acceptable enough case for the pro-life movement. This doesn’t divorce the film from being propaganda. Of course the film has some truths to it. That’s the essence of great propaganda. You pepper in some facts and than overblow everything else to make the message stick. One of the first scenes features Abby overseeing an abortion where a fetus of 13 weeks is portrayed as fighting for its life. However, Jennifer Villavicencio of the American College of Obstetricians and Gynecologists has noted that this form ultrasound-performed abortion would show movement but not to the extent that the film showcases, nor is there any unique neurological activity to believe there is any pain registered by the fetus. The abortion antagonist of Cherly is made all the more evil as she relates their work being akin to how fast food restaurants make money by selling French fries and soda. Not to mention the abortion doctors take far too much glee in their job, at one point shouting out “beam me up, scotty” as they finish up an abortion.

Unplanned is a biopic that doesn’t make any reasonable argument for the pro-life movement that a poorly-written Chick Tract comic doesn’t already attempt. In the tradition of previous Pure Flix pictures, it contorts and cartoons Abby’s story to make abortion all the more vile, given the same toxic glaze also used for atheists and the ACLU (which was idiotic in God’s Not Dead 2 considering the ACLU would be coming to the defense of Christians in their right for free speech). I rarely do this in reviews, but I’d instead point viewers towards the eye-opening documentary of After Tiller, a documentary that gives the real story on what goes on within an abortion clinic rather than the propogandic depiction Christian provocateurs tend to favor. Sure, Unplanned could merely write itself off as being exaggerated for the sake of entertainment, but somehow I doubt the core viewership for this kinda film are not going to accept it as mere popcorn drama and not the usual Christploitation nonsense that affirms their believes with a reassuring ridiculousness.