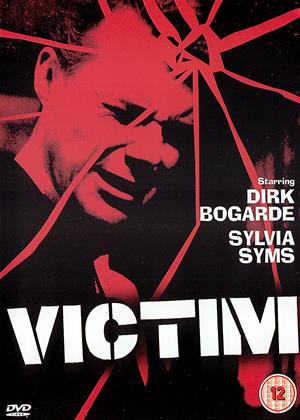 After Sapphire, Dearden and scriptwriter Janet Green again married social commentary to a murder story, this time to explore the illegality of homosexuality which was allowing the widespread blackmail of homosexual men. Victim pulls a lot of punches. The lawyer played by Dirk Bogarde who expedites the investigation into the death of a rent boy doesn't actually have sex with men. He is married, and resists the impulse. But he does make clear the desire is there in a passionate speech apparently written by Bogarde himself. But the level of candour was still a big leap forward. Credit to all the cast and crew in making this film when the stigma might have caused considerable harm to their careers. It was banned in the US. The main attraction of Victim for me is the poignant performance by Dirk Bogarde, really the gateway to his many great roles of the sixties, particularly with Joseph Losey.

A brave film for its era. - Victim review by TB

A very daring film considering that at the time homosexuality was illegal.

It was good to see that it presented homosexuality in an honest way and showed that it existed in a cross-section of society from barristers to shop owners. So a brave role indeed to take on for Bogarde, who was excellent in portraying a homosexual who must of had to hide their emotional feelings during that time due to being scared of being found out, persecuted for who they were or in this case blackmailed.

I liked the way it focused on the love that Farr had for Barrett, and despite now being married and having a high level career he was willing to put it all on the line due to the obvious guilt he felt towards spurning Barretts cry for help against the blackmailers who were holding not just Barrett but many other homosexuals to ransom.

A groundbreaking film that not only was a good thriller but highlighted the horrible persecution of homosexuals in a film that must have pushed and questioned the social consensus at the time towards homosexuality.