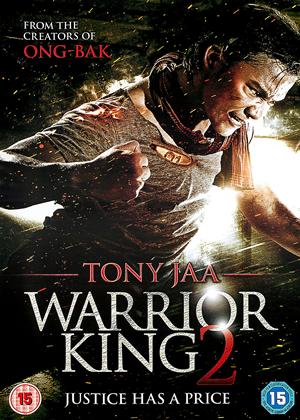 Eight years after the excellent original, this disappointing sequel does little but go through the motions. The plot is minimal, the baddies are uninteresting and indestructible star Tony Jaa proves he can’t act. There’s lots of biff-&-bash in the Jackie Chan style but the set pieces lack the visual panache that the same director brought to the original. Even the girl-power moves of pint-sized JiJa from Raising Phoenix add little to proceedings.

This was the first Thai actioner to be filmed in 3D and maybe that accounts for the flatness of some of the shots in 2D, such as a fist thrust towards the camera. There are a few good stunts but that’s all. Only worth watching for completeness after the superior first film.

Perhaps I am not the best person to have been asked to review Warrior King 2 – having not seen the first one, though I am assured it is another violent Taiwanese revenge feature – however I attempted to take my seat with an open mind and positive attitude.

A direct sequel to the Protector, which appears to be the American title of the original action packed picture Warrior King 2 sees Tony Jaa reprise his role as the hero Khum and despite my attempts at optimism I can honestly say that Warrior King 2 is one of the worst films I have seen this year.

Now working at some kind of elephant farm or stables Khum finds himself accused of murder after the owner of elephant trope is found dead. Pursued by the bloodthirsty and grieving twin nieces of the elephant master Khum must go on the run, fleeing both them and the police, and somehow prove his innocence. However, as with many of this hyper gory and stunt filled action films from the Far East there is more to the narrative, and a bizarre twist brings Khum into the lap of a dangerous terrorist plot to blow up a visiting dignitary.

As if the synopsis didn’t give you enough reason not to watch this travesty, then perhaps a few snap shots of the utterly over the top and pointless action, including battles on dirt-bikes and sword wielding twin ninja’s, and to top it off some truly shoddy and dreadful CGI all combines to make Warrior King 2 a complete and utter waste of time.

Unfortunately my editor won’t let me post a rating lower than one so, as much as I’d like to give this a zero, it will have to appear slightly better than it in fact is with its single, lonely star..