Rent Werewolves of the Third Reich (2017) 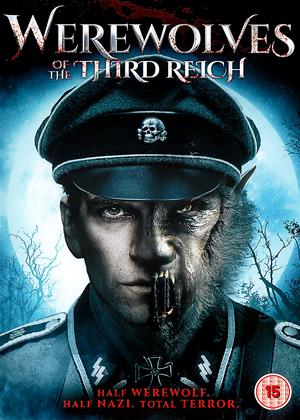 Rent other films like Werewolves of the Third Reich

Reviews (5) of Werewolves of the Third Reich

Spoilers follow ... - Werewolves of the Third Reich review by NP

I am not sure there are any film-makers currently as prolific as Andrew Jones, who, with production company North Bank Entertainment, continues to release low-budget horror films at a fast rate of knots. Most are enjoyable, some very much so. Never afraid to ‘pay homage’ to other projects, Jones here writes/directs something very close to Quentin Tarantino’s ‘Inglourious Basterds’, but on his terms.

It is bargain basement stuff, of course. Hitler’s briefing room is backed with black drapes, while he sits in front of an un-ironed swastika drape, whilst true to Jones’ direction, many scenes are a collection of close-ups. The best performance probably comes from Suzie Frances Garton as the resolute and duplicitous Ilsa (what else?) Koch – with suggestions of sensuality beneath that pristine cool veneer, she attacks the role with relish. In a disappointingly brief appearance, sometimes Jones regular Jared Morgan plays the bar-tender; he is always good to see. Perhaps it is ubiquity to blame, but I find it more difficult to be convinced by Lee Bane as ‘Mad Dog’ Murphy, someone too stylised to ever truly exist; whispering every line Eastwood-style, his avowed intent and catch-phrase, to ‘kill Nazis’ becomes more irritating than threatening. As ever though, he plays his role to the hilt and offers the key: don’t take things too seriously. Other performances (and accents) vary greatly. Hitler, for example, provides Oliver Fritz an opportunity to display the Fuhrer as a bizarre, ailing grotesque.

There are some interesting choices being made here and as is often the case with Jones’ projects, the more you watch, the more these choices take you in. The long conversational scenes, the slow-burning story-telling, and some ripe performances combine with simmering interest, a good build-up of threat and as ever, some nice location filming that does enough to allow you to believe events are taking place in Nazi Germany 1944. That’s another thing with films from the North Bank Entertainment stable – they cannot be accused of being unambitious. This could have been set in England with no Hitler appearance at all – but no, we have approximations of American accents, two curious werewolf hybrids and a bucket-load of Nazis.

For a story with ‘werewolves’ in the title, we have to wait a long time for even the first mention of them by name. The reveal comes at the time the two main story-strands come together, in a midst of monster masks and CGI blood-splattering. Like the rest of the film, some moments will leave you impressed, others not so much. But it seems the adventures of (don’t call him) ‘Mad Dog’ Murphy and his band of men are not quite over, as the post-credit flier tells us.

Terrible film - Werewolves of the Third Reich review by Doug

Beyond belief in terms of tack !! - Werewolves of the Third Reich review by GB

Fair play to the review above that seems to take it somewhat seriously ? I however cannot take this seriously, because whilst I rented it and expected little, I actually think this is the worst film I have ever seen. Shocking acting, "direlogue" beyond belief, and just plain hilarious sets and locations ! Can't afford a mock concentration camp ? Well let's film down the local bin yard ! Let's use a wide aperture so the background is completely out of focus preventing the reveal of some 2018 landscape. I could go on, but you get the point. The "Epilogue" sees several characters meet some "40 years later" get they look EXACTLY the same except for some clothing changes ? Cheap and nasty in every sense, just awful !!

Rubbish - Werewolves of the Third Reich review by PS

dont bother with this film.

I enjoyed this film. OK it has many faults, chief of which is the atrocious werewolf 'make-up' (basically a couple of masks!) and NO transformation as in AMERICAN WEREWOLF IN LONDON as that'd cost too much.

And the locations are sometimes hilarious - Cardiff stands in for Berlin, for example, and the Welsh countryside is Argentina at the end! And concentration camps have only 4 prisoners who all look rather plump LOL!

And of course, Mengele escaped Germany and died of a stroke whilst swimming off Mexico in 1979, as his exhumed body proved a few years ago.

This is a very bitty movie done in chapters - but I liked that.

MASSIVE plot hole at the start when a barman who cannot understand English then apparently can understand a long speech. But hey, it's TRASH and knows it's trash. It's honest in that and I enjoyed it way more than dreadful movies such as LALA-LAND or BIRDMAN or BLACK SWAN - all Oscar winners!

This is obviously influenced by another awful movie: INGLORIOUS BASTURDS or however the over-rated Tarantino is spelling it these days!

The accents wobble hilariously (Americans say 'uman NOT Human!), but the special effects blood splatter will no doubt appeal to teens.

So anyway, better than some other Andrew Jones trash like ROBERT and ROBERT 2 which were so slow, and holds the tension better than the 2nd half of CABIN 28.