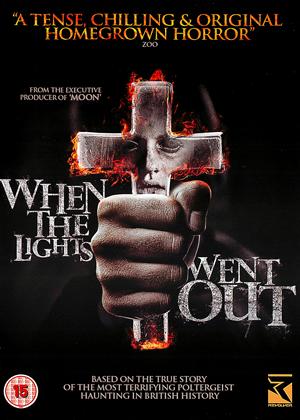 Rent other films like When the Lights Went Out

Reviews (2) of When the Lights Went Out

If you are looking for big budget special effects then this is not for you. This film has good acting by all the lead actresses and actors along with a decent script based on true events which the film maker has managed to re-enact in a thought provoking manner which isn't over the top yet still keeps the viewer interested until the end. For anyone born pre-70s, the costume and sets used will definitely bring back memories and if you are looking for something that hasn't been Americanized and is true to Britain - give this one 83 minutes of your time at least once.

Brilliant Low-Budget 1970s-set Poltergeist Britflick - the Best Horror Film I have Watched for Ages! - When the Lights Went Out review by PV

I LOVED this film - it is watchable, effective, scary - with some real jumps - and is pretty spot-on re the 1970s decor and issues. Nice to see a film set 'oop north' in Sheffield (South Yorkshire) area too, from the accents. The era is shown accurately - women in scarves, the freedom kids had back then, the hard-drinking council house working class men (in work, back then, in industry), coal man delivering etc. ALL spot on and rarely seen.

My only criticism is there is not a SUBTITLES option and I was not so sure about some school scenes - I think girls in 1974 had to do domestic science and boys did metalwork/woodwork. Most people had black and white TVs then too so that is as spot on as the hideous orange and brown patterned wallpaper.

Anyway, I LOVED this. Skillful use of pace and imagery suggests a horrific presence which is always way more effective than endless CGI (ask Spielberg whose Jurassic Park did the same, with dinosaurs on screen for only 6 minutes or so - the rest is suggestion). So the noises, the chil, the swinging lampshades all work so well. And the exorcism scenes are not so silly, nor is the historical bit, because it does not go on TOO long - this is a quick, snappy film, and keeps the interest from the beginning till the end. This is WAY better than all the state-funded drivel paid for by the BFI, Lottery, BBC - all pc box-ticking and so slow and boring. This is not slow or boring - it is GREAT!

A perfect little British horror film which needs to be seen by more people. Original, in its setting, though of course ALL exorcism films will be compared to The Exorcist. BUT I preferred this film to that. Poltergeist is another reference.