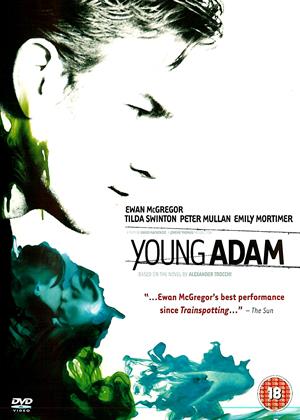 Before I write this review, I first have to lay my cards on the table: I am a massive Ewan McGregor fan. Since Shallow Grave, he has made some of my top 10 films of all time. He consistently takes chances, tackling roles many actors wouldn't even consider. Even films which are not great as a whole (Deception,) still are interesting because of his work. Young Adam is a film which doesn't feature in many people's top 10 lists of his films, but which absolutely should, because in many ways, to me it is a masterpiece.

It is a film which depicts a tough, poor Scotland, filled with people who are not cardboard cut-out stereotypes but completely believable: hard working, short tempered, determined, intimidating. The streets are filled with mist and people walk with their heads low, the grime hanging in the air and the coldness of the winter coming out of the screen, which then gives way to the sleazy and treacherous underbelly. It is a world which the author Alexander Trocchi knew well. In many ways Young Adam is a biography of his life, although you could say that even the film is restrained compared to his experiences, notably his pimping out of his wife to fund his deteriorating and destructive heroin addiction.

One of the best things about this film is how it emphatically pulls no punches. This is a film in which deeply unsympathetic people scam, cheat, lie and sleep with each other; there are no winners in this world and the film never shies away from that. The sex is graphic and honest, the dialogue hard edged and raw. The young son, in many ways the only innocent in this film, is destined to a life of hard graft, with little reward. You feel sorry for what you know he will have to adapt to.

Ewan's character, Joe, may be the protagonist, but he is an antihero to the extreme. Prone to long silences, deep in thought, he may come across as an intellectual, but as the film goes on, his immorality and complete disregard for anyone and everyone is laid bare. This is a man who moves into a new property and immediately sleeps with his landlord's wife, compromising their family. But he also knows what he is and does not shy away from the consequences. When faced with the potential to get a family with a decent and hard working woman, he tells her "I am not someone you want to marry."

Adding to this excellent performance are superb supporting ones. Whilst Tilda Swinton got high praise and a Scottish Bafta for her role, Peter Mullan and Emily Mortimer also do some of their best work. As the brooding Les, Mullan is perfect, his ability to bring an underlying threat and violence second to none. Whilst at first almost a father figure who takes Joe under his wing, he then has his life casually destroyed by the very person who he has opened it up to. Emily Mortimer is perfectly cast as the innocent but eternally hopeful Cathie and Tilda Swinton is brilliant as well, as the tough as nails Ella.

For some, (including a friend of mine who I highly recommended this to and tried watching it on a Sunday afternoon expecting a fairly light-hearted watch,) this film will be heavy going. But I cannot recommend it enough. If you want a brilliantly made, perfectly acted and atmospheric film, rent this.

A mesmerising drama with a haunting feel and first class performances. This is a tale of passion and lust with an added mystery element thrown in for good measure. Set Scotland in the 1950s and Ewan McGregor plays Joe, a rootless drifter who finds work on a coal barge run by Les (Peter Mullan) and his wife Ella (Tilda Swinton). One morning Joe and Les find the half clothed body of a young woman floating in the Clyde. As an investigation begins Joe and Ella begin a passionate affair and Joe may know more about the dead woman than he is letting on. The film has an interesting structure and tells the story with temporal shifts that reveals little each time the narrative moves to unsignposted flashbacks. It works really well, looks great and really captures a sense of life on the river in a decade where sex and relationships were conducted much more discreetly and with social stigma a risk for violations of acceptable conduct. This is a character study focusing on Joe and the film plays it from his perspective. He uses sex almost as a weapon to control and manipulate until he tires of his surroundings and almost seems driven to destroy happiness he sees around him. The film has a couple of jarring scenes that seem a little out of place but with Emily Mortimer in a supporting role this is a great British film that is well worth checking out if you've never seen it.