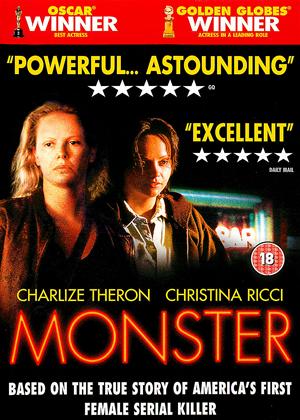 Synopsis:
A prostitute since she was 13, Aileen Wuornos (Theron) is a drifter with no friends and no family. Alone in a Florida bar and on the brink of suicide, she meets a young woman, Selby Wall (Ricci). Misfits thrown together by chance, they're kindred spirits - Aileen, the victim of a tragic and abusive upbringing; Selby, rejected and abandoned by her parents. Aileen is desperate to sustain the relationship that soon develops between the two of them and earns money the only way she can - turning tricks. Then, one fateful night a John turns violent. In self-defence Wuornos shoots him dead and unleashes inside herself a rage that will compel her to kill...and kill again.
Monster is the true and often moving story of the woman who was doomed to become America's first female serial killer
Actors:
Charlize Theron, Christina Ricci, Bruce Dern, Lee Tergesen, Annie Corley, Pruitt Taylor Vince, Marco St. John, Marc Macaulay, Scott Wilson, Rus Blackwell, Tim Ware, Stephan Jones, Brett Rice, Kaitlin Riley, Cree Ivey, Catherine Mangan, Magdalena Manville, T. Robert Pigott, Romonda Shaver, Glenn R. Wilder
Directors:
Patty Jenkins
Writers:
Patty Jenkins
Studio:
High Fliers
Genres:
Drama, Lesbian & Gay
Awards:

Very moving - Monster review by A

Powerful, moving and emotional piece that really makes you think. I loved the balance in this movie, how she was shown both as extremely vulnerable and same time highly volatile and dangerous. Well-directed, well-shot, well-acted.

ok, but only worthy as a tv film!

This is little more than a big screen version of a well produced made for TV movie and to give it some credit Charlize Theron is pretty convincing as Wornos. Though Nick Broomfield's 2003 documentary 'Aileen: Life And Death Of A Serial Killer' is a far better and more interesting look at the life and death of Aileen Wuornos.

A monster with some redeeming qualities - Monster review by PT

Okay nobody can argue that the crimes of Aileen Wournos were not heinous, period. The director Patty Jenkins has made a film that tries to imagine the circumstances that led this woman to take the step into the void of inhumanity.

Theron plays the part so well I really felt for the character, given her horrendous past, and the scene in the courtroom when she motions through tears to her girlfriend that its okay I found particularly moving.

This is a great character based film.