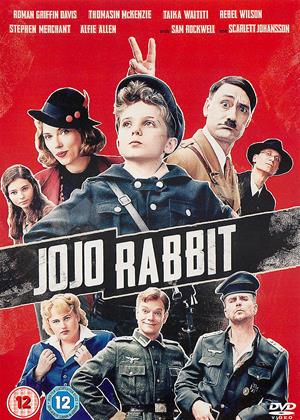 Most of the jokes revolve around “haha funny Hitler” and the film simply doesn’t have enough finesse - nor is it funny enough - to achieve top marks. With that said, Roman Griffin Davis delivers an astounding performance and Waititi’s writing gives the movie the oomph it needs.

I enjoyed this film. It mixes humour and drama well. The acting is decent and the jokes are dark but fitting with Taika's style. Strong movie that I would recommend.

Oh dear. It's difficult to put into words how bad this one is. The premise is certainly intriguing - Hitler as imaginary friend to little Hitler Youth member Jojo, but unfortunately Roman Griffin Davis as Jojo is rather one-dimensional throughout, and Waititi’s badly misjudged performance as Hitler underlines the fact that the film is (and I'm assuming it's trying to be both) neither a hard-hitting satire nor a heartwarming 'love conquers all' piece, but ultimately a bland work from which I was glad to be released.

I like the idea of ironic anti-Semitism, like the idea of treating horror with ridicule, like the idea of a film which wants to rub our faces in the horrible thing and making us confront it with an amusing tonic that helps the medicine go down, but this definitely ain't it, and after a few potential threads, Waititi ultimately just opts for the path of least resistance and you're left wondering what the point of it all was, frankly. For the film fails to attack, or even really notice, the evil before us, and the moments when people are shown hanged in the streets serve only to point up the sanitised, a-historical silliness of everything we're shown on-screen which means we are given precious little to think about en route. Awful.

I think half the reviewers here have missed the point about this superb movie.

It is a ten year old boys view on the war, and relationships, as he is engulfed into the Nazi Youth movement with his imaginary “best friend” Adolf Hitler !

It is very funny, but does nor hide from the horrors of war and all the cast do very well with the clever script.

You know you in for a unique experience, when the opening credits combine the Beatles singing I WANT TO HOLD YOU HAND - in German , with historical footage of  a Hitler “Rally” and all the Germans are raising their hands in the Nazi salute.

Watch this movie for a real treat.

This is a watch it twice film, you just take in all the gags in one go. The acting was first class, and it was very pacey Waititi's physical humour was evert bit as good as the gags and Wilson and Sam Rockwell rounded out the Nazi side perfectly. All round a great watch and I will be watching it again, can't understand the negative reviews, maybe they just don't get it?

Compassionate, funny and thoughtful. Frightening too. Very compelling. I watched it twice an d in the cinema

Jojo Rabbit has come branded in its marketing as a satire on hate. It’s not exactly the hardest feat to pull off. Mocking Adolf Hitler has always been a rather easy sell, as is the mockery of Nazi party and their flawed fascist ideals. While this picture doesn’t quite pack the big bite, merely showcasing the easy jokes to make out the ignorance born from Hitler’s influence, it does well enough staging a whimsical romance and a telling tale of how powerful imagination can be.

It’s the final days of the Nazi party in Germany but the 10-year-old Jojo (Roman Griffin) is under the impression that the party is just getting started. He has been conditioned by the Nazis to not only believe that they shall win but that Hitler is the absolute best. So idolized is Hitler that JoJo has placed a quirky version of the leader in his mind that can deliver witty talks and encouraging pep talks. The magical version of Hitler is played by the director Taika Waititi and is given a chummy appeal to make the monster seem more pleasing to children. Even if he does constantly offer Jojo cigarettes, he represents a certain wonderment of being a man, that everything will be perfect so long as he follows the words of his hero.

But those words don’t work out so well for him. While at a camp for training little Nazis, Jojo has a mishap with a grenade when trying to prove himself. The accident leaves him with a scarred face and weakened legs. He feels as though life is over for him as he’ll no longer be able to serve his country on the front line. Still, his mother (Scarlett Johansson) sticks up for him and keeps his spirits chipper. But then Jojo’s life is thrown a curveball when he discovers there’s a Jew living in his walls. Jojo is frightened and confused by this girl, Elsa (Thomasin McKenzie). Where are her horns? Why does she hide when she is such a demon? And how is it that Jojo is not able to kill this girl? Could it be love? Or hypnotized Jew love?

The film thankfully favors more of this quirky childhood romance than political satire. Roman and Thomasin have a very cute coupling as they try to understand each other amid a tense war that rages right outside their doors. They struggle to keep secrets and come to emotional realizations as empathy slowly forms. It’s fairly routine but still charming as it is.

On the outside, Jojo’s associates are built from familiar tropes and simple Nazi gags. Captain Klenzendorf (Sam Rockwell) is the Nazi Youth captain who has grown bitter and drunk but still has a bit of affection for having been wounded himself. He’ll still fall in line to make uninformed statements about Jews and draw himself up a ridiculous outfit to wear into combat. Another Hitler Youth instructor is Fräulein Rahm (Rebel Wilson), a woman who specializes in gossip about the enemy, making up wild stories about curses and hypnotism. Stephen Merchant plays a smiling and intimidating Gestapo who provides some added tension. All of their gags are fairly predictable and treat on relatively safe ground easy enough to mock for bumbling bad guys of ignorant minds.

Jojo Rabbit never quite hits that sweet spot of either political commentary or childhood romance but damned if it doesn’t come close. There always seems to be a certain heart present and a satire that makes itself very clear what it’s all about, especially for a climax of Jojo quite literally telling Hitler to go F off. There’s some darkness to its tale to make the sting of war reasonably deep as well as simple moments of warmth between Johansson and Griffin. It’s an easy comedy with an uneasy twinge of something more not quite being there.