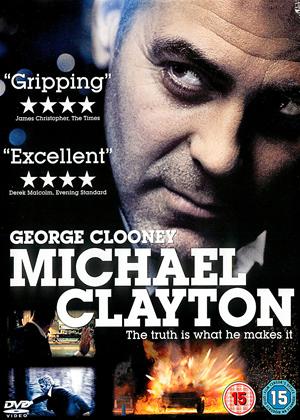 A superb film which keeps you completely engaged right the way through. Clooney is excellent in the title role of a fixer for a powerful law firm in New York. He has to sort out problems, like a rich guy who is in a hit and run accident, but is not happy doing the job and wants to get back to litigating.

He is called upon to sort out the 'mess' caused by one of their lawyers, Arthur, played brilliantly by Tom Wilkinson, who seems to have gone completely crazy. Arthur's apparent breakdown leads him to try and sabotage his own case representing a chemical company. However, Arthur discovers that the chemical company seems to be responsible for the deaths of many people and his conscience won't let this lie. This is all very inconvenient for the chemical company's lawyer, Karen Crowder, played brilliantly by Tilda Swinton, who will do whatever it takes to preserve the company's 'good name'. Some powerful dramatic scenes, an excellent cast and interesting plot twists and turns keep you enthralled until the end.

I'm beginning to think this man can do no wrong. Certainly this isn't a particularly original story, but it is done brilliantly, with superb performances from Tilda Swinton and Tom Wilkinson, with plenty of twists and turns. One measure of a good film is whether you care what happens to the protagonists, good and bad, and I certainly did. A highly satisfying watch.

A fixer who gets fixed - Michael Clayton review by CP Customer

Really good thriller. Clooney is excellent and puts in a performance far better than his Oceans movies. You always know that those who clean up others mess will eventually have it dropped on them but the excitement goes right to the end.

Very American story about conspiracies in the business world, but fear not the hero will prevail, so no surprises in the end.

What was it about exactly, who is this guy, plot...what plot? - Michael Clayton review by CP Customer

I don't know if we watched a different film but I don't know how this film can be described as engaging, thrilling or gripping, it seemed to over complicate things by not actually explaining anything, the film wants you to put more than all your effort to understand it and it just isn't worth it, with it's strange sub plots (i.e. Michael Clayton's family were brought into the film a few times but it went no where and left you wondering why they were even in it). We waited for the film to 'get into it' but let's just say this didn't happen until the final 5 minutes (I think but who can be sure), which is when George Clooney sort of explains his job, normally in films these hints are dropped in the beginning to give the viewer some idea of what is going on; this film decided to re-invent this idea completely. Maybe there was a little drama somewhere in the film, who knows, I think I'd dropped into a confusion/boredom induced coma by that point. We found this film so boring just because it made it so difficult to get into purely due to the fact that it didn't explain who anyone is or what they do, we can usually pick up on things in films quite quickly but this was an impossible watch and we got the feeling the only effort they made was to hire George Clooney and thought 'this will get the ratings'...the evidence of this is at the end credits; we get to watch him sitting staring at nothingness in the back of a taxi for 10 minutes, this just sums the film up. I wouldn't recommend this film as it seems to want you to stay confused and lost all the way through...and what were the 3 horses on the hill all about?

A good film worth watching but pretty unremarkable. Too similar to other Clooney films. Thriller is not a good description, though it keeps ones interest going.

I cannot understand anyone not rating this film highly. It is brilliant on all levels. Of course the basic subject matter of class action lawsuits for big corporation misdeeds has been covered in film before - think Erin Brockovich, Class Action, A Civil Action, The Insider - but never with such suspense and wonderful acting. Speaking of which, for a masterclass in movie acting (which requires infinitely more subtlety than stage acting), watch George Clooney's face carefully all through the last few minutes when he's in the taxi going nowhere and the credits are showing on the right hand side of the screen. You can almost read his mind. Amazing and impressive.

i had already seen the film when it was first released. It had great impact.then and, although I had remembered the ending so no surprises there, it hardly mattered as a second viewing kept my full attention throughout. It was perfectly cast with Clooney at his most mesmerising as he always is when the script and story-line have weight and sophistication. The plot, I have to acknowledge, does resemble that of Erin Brokovich but that's hardly surprising when there seem to be a number of class-action cases such as these prevalent at any time. I could write more in praise of the film but I'll recommend you read those reviews which are generous in their praise. I heartedly endorse what they have written.

Had to turn it off half way through. My husband also found it very boring. Very rare we feel we can't watch a film!

I think this may be another of those films where a best-selling novel with a lot of wordy introspection but very few striking visual images was poorly adapted for the screen. George Clooney scowls well, and expresses self-doubt tipping over into self-loathing like a pro, but not a lot really happens.

The very first scene has a voice-over by a supporting character who has suffered a severe mental breakdown in which he hallucinated hideous and extraordinary things a director like Terry Gilliam would have had a ball with, but what we actually see, after the credits have finished rolling over urban scenery, is his voice coming out of an answering machine in an empty office. The whole film has this problem - it's the first courtroom drama I've ever seen without one single courtroom scene!

The massive court-case the hero's law firm has been fighting for six years on behalf of evil industrialists? Entirely offscreen. The evil they've done that forms the moral crux of the whole movie? Never even glimpsed. Our hero's troubled relationships with various members of his family? Almost entirely offscreen, especially the allegedly tremendously important problems he has with his alcoholic brother, who's in the movie for about a minute. His gambling addiction? Represented by one very brief scene (though we do see it twice); and so on. And then of course there's that spectacular mental breakdown, the event which kicks off the entire story, but which we don't get to see, other than a brief found-footage video clip of the least dramatic part of it that stops just when it was getting interesting. Still, the characters describe all the action we've missed to each other, so at least we know it happened.

Apart from our hero scowling at himself until he's finally pushed so far that he does the right thing, we aren't properly shown much of anything, and there's a lot of baggage which feels as though it was important in the book but the movie didn't have room to do it properly, such as the subplot in which the mentally unbalanced character comes to believe that the bizarre events in a children's fantasy novel are real, which is constantly referenced as if it'll be crucial but ends up going absolutely nowhere, or the many supposedly important characters who appear for precisely long enough to establish that they exist, and not one second longer.

Oddest of all, at the end the film suddenly changes its style and starts behaving like a thriller, even though the sequence in which this occurs generates no suspense whatsoever, owing to the fact that we know exactly what's going to happen because we already saw it 90 minutes ago! And what's the Clooney character's vitally important job supposed to be anyway? As far as I could tell, it's being the only person in a firm employing 600 lawyers who doesn't have zero common sense and even less charisma. Is that an actual job? I doubt it!

Courtroom drama with no courtroom and very little drama, in which George Clooney seldom looks at all happy, and Tilda Swinton never looks at all well. Don't bother.

0 out of 2 members found this review helpful.
Show more
We use cookies to help you navigate our website and to keep track of our promotional efforts. Some cookies are necessary for the site to operate normally while others are optional. To find out what cookies we are using please visit Cookies Policy.