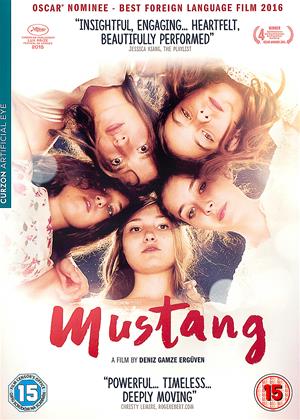 It’s rare for a socially important film to be any more interesting than a Ken-Loach-type diatribe against the establishment, but Mustang is wondrous cinema. It’s an absorbing, beautifully realised film that will both uplift you and make you as angry at Turkey as Midnight Express did.

Five sisters, as free-spirited as the Wild West horses that give the film its title, are scolded for playing innocently with boys on their way home from school. For this they are subjected to a virginity test. ‘One minute we were free and then it all turned to shit,’ says the youngest, Lale, in voice-over. Their house becomes a prison and a ‘wife factory’. They’re forced to wear ‘shit-coloured dresses’.

If the premise sounds unpromising, the viewing experience is a revelation. Filmed in a style that is both naturalistic and luminous, it’s like an amalgamation of two other brilliant films: Virgin Suicides and Innocence.

Director Deniz Gamze Erguven is a French-Turkish Sofia Copola. Provocatively, she films her innocent girls in various states of undress around the house, which has drawn howls of reactionary outrage in Turkey. This merely proves Erguven’s point that Turkish society defines everything women do in terms of their sexuality. The backlash to Mustang in her home country has been violent, with she and her cast subjected to such threats that she has vowed never to make another film there.

In Turkish cinema it has been a long time since the heady days of Yilmaz Guney, who directed his amazing 1982 film Yol by proxy from a prison cell. Mustang is searing, shining cinema that bears comparison. As well as being a trenchant critique of rural Turkish society, it’s about coming of age, making the most of one’s options whatever one’s circumstances and much more besides.

Can the girls escape their lot? You’ll be rooting for them, especially the feisty Lale, Deniz’ alter ego, as the narrative builds to a tense climax.

This is the story of 5 teenage girls confined to the family home while plans are made to marry them off, but they are not going to just take it and do nothing about it...

It is a brilliant movie. The 5 girls have so much personality and are so rebellious, it is fascinating to see how they battle the powers that be, i.e. the patriarchal order that dominates life in the villages of Anatolia.

The film is not didactic and is well-made. It is a very good, very authentic film. The acting is excellent too.

Girls just want to have fun - Mustang review by MW

Charming story of the travails of five fatherless teenage Turkish sisters whose youthful exuberance for life is suddenly curtailed when they are effectively locked up by their uncle after having been observed frolicking in the sea with local boys. Life is downhill from there on in this stifling patriarchal society with first one then another sister being married off reluctantly to dumb-faced, half-witted suitors chosen by their uncle. Eventually the tables are turned in a gloriously anarchic fightback led by the youngest sister. This is a little joy of a movie.

I did not enjoy this film. I welcomed the fact that it brought to our attention the oppression of women in rural Turkey, and also the oppression of women by other women (here portrayed as old, fat and headscarf-wearing). Unfortunately I thought the characters were all rather crudely and one-dimensionally presented, and there was very little development of them: surely there could have been more to the one older woman who actually helped the girls attend a football match by knocking out the electricity in the village to stop the men seeing them on television? And what about the grandmother who brought them up? Was she conflicted?

But what made me feel uneasy was the sense that this was actually soft porn: the 5 sisters were all stunningly beautiful, beautifully photographed, with lots of scenes of them entwining round one another. I have not been to Turkey, but I did find one Turkish reviewer who said that the film was unrealistic, and I can't imagine that rural Turkish schoolgirls, however liberated they may be, dress like St Trinians, or frolic in the sea with male schoolmates, (which leads inevitably to a wet blouse scene). And were the expletives which were in the subtitles actually how they spoke, or meant deliberately to titillate and shock?

So I was left feeling uncomfortable, and wondering what the motivations of the Cannes jury were.

At least there was a Nick Cave soundtrack.

Five sisters have been seen galloping too freely, (in the eyes of arch conservatives who believe that "women must be chaste and pure, know their limits, and mustn't laugh openly in public"), and so are coralled into a prison house by their guardians; the walls and bars closing in and climbing higher after every escape.

It is not only imprisonment the girls have to endure. The house becomes a wife factory as the girls, no longer allowed to go to school, are instead taught how to be nothing more than a domestic servant, ripe for arranged marriages and second-class citizenship. The youngest, Lale, witnessing how the wishes and happiness of her sisters have nothing to do with the future laid out for them, decides she's having none of it, and, no matter the consequences, that running free and wild is better than being tamed into submission.

It's so nearly a five star film. In fact, it probably is, and I'm being overly harsh. The pace is spot-on. The acting is flawless. The script, the photography, the unobtrusive music, are very fine. My only reservations lie with characterisation. The girls' uncle is perhaps too much the cardboard cut-out villain. To make him an abuser may be par for the course for the type of man who thinks women should be subjugated, but it does feel as if we are being told that this is a BAD man, in case we hadn't quite got the message. Then again, maybe the abuse strand had a point insofar as that might be why the grandmother colludes in marrying the girls off in rapid-fire succession. In that way, she is 'rescuing' the girls from his hands.

I also wonder at the way in which the relationship between the sisters is handled. It might be that I'm looking at it through the eyes of a different culture, but they seemed too close, almost inseparable. There wasn't any of the enmity, even hatred, that can fester between siblings, especially at their age. Again, maybe I'm wrong. The girls are orphans after all, and would have had to bond in order to make life easier.

So maybe this is a five star film. It is certainly an excellent one. Deniz Gamze Erguven's debut has all the hallmarks of a great director at work.