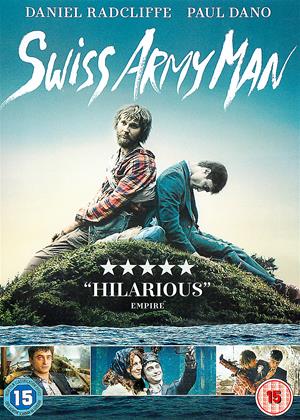 Castaway Paul Dano finds a dead body (Dan Radcliffe) washed ashore. Using his farting body as a jet ski, he escapes to the shore of Humboldt Redwoods. That’s not the talking body’s sole usefulness in this surreal comedy, which amazingly manages to maintain the conceit for 94 minutes. It’s a challenge for the Daniels (writer/directors Scheinert and Kwan) to keep such a two-hander interesting for so long, but the film really works.

In the excellent DVD extras (making of, behind the scenes, interviews, film commentary etc.) they explain how they wanted to make ‘a celebration of friendship and collaboration’ as well as ‘a beautiful and heartfelt movie about a farting corpse’. Incredibly, they succeed on all counts. It’s a film in which you never know what’s going to happen next, which is unfortunately rarer than ever these days. Watch and wonder

Thoughly recommend this very original film. You wouldn't think that a corpse would take much acting, but Daniel Radcliffe is brilliant, and Paul Dano is a believable character in a very strange situation.

Garbage seems the most suitable word! suffered this film for 30 minutes before we gave up. Is this supposed to be entertaining? Then again I am beginning to believe thatCinema Paradiso are giving their films false praise

I got this film out because it had had some rave reviews, and I often enjoy quirky, different films. However, to me this felt almost as if it was a film project done by teenage boys featuring the things that they would find funny. Despite watching it through to the bitter end, it didn't improve for me, and I was left wondering what the point of it was - but maybe that's just me. 3

I Absolutely LOVED this move soo much I have just Purchased it .

It is Completely Bonkers .

A Modern Day 'Robinson Crusoe' who finds a washed up and Dead ,Man Friday his Salvation.

A Movie you wont have seen Anything even slightly like before .

Worth more than the one watch , I loved it and I think anyone with a sense of the Bizarre will also .

Before watching this film the only thing I knew about it was that Daniel Radcliffe plays corpose. And, in my view, knowing very little about the film is the best way to watch it.

This is an extremely odd film which wasn't for me. But there is no point in getting angry about it as i had read about it before hand and knew what was coming. It is very original but far too dark and strange for me.

If you enjoy simple minded toilet humour, then you may like this. - Swiss Army Man review by ME

I didn't enjoy it. Gave up about half way through due to it being full of bodily function humour, which I do not find funny, to skip to the end. It wasn't worth it.

Okay, so… that happened. Paul Dano gets stuck on a deserted island, befriends Daniel Radcliffe’s corpse and uses it as a multi-purpose tool - a Swiss army knife if you will, and then realizes his magical properties while learning thing or two about farts. A ridiculous premise that mostly relies on weirdness and shock-factor to tell its ridiculous story which, unfortunately, doesn’t go deeper than that trench the character Hank buries the semi-character Manny whilst trying to kill a squirrel, or was it conjuring up a bonfire? Nevertheless, Swiss Army Man, when stripped from all that silly within, is not that deep as it thinks it is.

As Hank (Paul Dano) maroons/finds himself somehow/strands on an island, just before saying bye-bye to life by hanging himself, miraculously spots a dead man’s body which belongs to none other than Manny (Daniel Radcliffe). From here thereon, the movie starts spoon-feeding us slap-stick humor that is intriguing, but just not that funny. And to add insult to injury: farts start getting the comedic treatment for a majority of several scenes which frankly, I cannot see the point of doing so. And so we continue.

Manny as it turns out, wields some (borderline) magical properties that help Hank survive in his endeavors of equal time boredom and loneliness. So we come to learn, Manny serves well as a human-sized lighter device (shooting fire out of his arse), a harpooning machine (spitting harpoon projectiles at unsuspecting fish in a pond) and a hunting rifle (shooting off the head of a seemingly neutral squirrel). Directors Daniel Scheinert and Dan Kwan sure went out of their way to dig the craziest, most creative ideas out of their craniums and put them on paper for potential adaptation down the road later.

Some of them translated well, while other – not so much.

And one would think that a silly premise like the aforementioned farts and whistles would also yield silly over-the-top exaggerated acting to no avail; this is not the case, since Swiss Army Man features some of the best acting seen in a film (whether or not it’s method acting, I couldn’t tell); Paul Dano as the introvert weirdo does a great job of coming off as an introvert weirdo; Daniel Radcliffe has also gone to great lengths to distance himself from the Potter universe ad one can tell: his portrayal of a dead man has never felt so alive (had to, sorry).

Ultimately, Swiss Army Man boils down to a bizarre and unique digital picture to a point of being bizarre for its own sake. It’s also distinctively original, which is not always a good thing per se.

Should you watch it? The answer is probably yes.