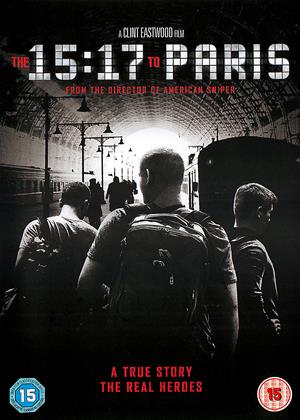 It takes an awful length of time to get to the action, and at times I found my mind wandering as the story line did not have enough depth to sustain it until the denouement of it!

You would not know it from this movie, but their were FOUR hero’s . At least not until the end when they attend the Medal Ceremony with the French President when their are FOUR hero’s on the stage.

3 Americans and a Brit ( Jeffery Stern)

That’s a pity as Eastwood has made a worthy attempt to show how ordinary people can do extra- ordinary things.

Only worth watching the last 20 minutes. The rest is just padding. Typical American view of events with little reference to the 4th (English) hero who took part in the action.

Young American soldiers deal with a terrorist plot on a Paris-bound train. - The 15:17 to Paris review by JG

This is presented as a film, but has a lot of biopic about it and in using the original principal participants is almost like a documentary. Judged as a thriller film it is somewhat lacking. The back story of how they grew up together drags the film into plodding (as a thriller). The story of their wanderings around Europe is boring but a lead in to the story. The story itself is undeniably heroic and justifies the making of the film. It is hard to think of any way the film could have been made better (the action part is too short for a feature length film), but nevertheless, as a film it disappoints. It is OK if you view it as a documentary. The best advice I have is watch this film if you do not already know the story, and accept it for what it is.

Clint Eastwood is not finishing his career in glory - The 15:17 to Paris review by CSF

The topic was good, the idea was good. However I can't believe Clint Eastwood directed it. He made a disastrous attempt to be original. He should have tackled the story in the same style as the good old Western Spaghetti...perhaps. I did not recognize his signature or his style. I notice that when American directors try to make a so-called European film it is always a failure. Pity.

The film is slow with padding scenes, sometimes confusing. Quite often films going between the past and the present are a successful trick but not in this case. Perhaps it is due to poor editing.

For a film-maker of Clint Eastwood's skill and pedigree this is a mind bendingly dull film. It's probably one of the most conservative and crass pieces of cinema I've seen in quite awhile. It's well known that Eastwood loves waving the American flag at us and in many of his films this can be forgiven because surrounding it has been a good film. Not here though. This retells the story of a genuinely heroic event where three American friends, on holiday in Europe, along with other passengers (who get scant mention in this film!), took down a terrorist on a train preventing him from mass murder. The few minutes of that actual event is strung out into a narrative that forces the viewer on a crash course into the boring past lives of these three (lives where guns, christianity and delinquency are thrust down ones throat as good American values!) and then onto their very dull European holiday where they take endless selfies, drink endless coffees and/or beers and slap each other on the back a lot. The film is not improved by the rather weird decision to have the actual three guys play themselves in the movie. They can't act....at all. The wooden performances makes them come across as rather dense and perhaps they are but it detracts from their courageous act, the purpose of the film in the first place! Either way this is a poor film, monotonous and dull.

The 15:17 to Paris review by Mark McPherson - Cinema Paradiso

But did you know those actors were the real people? Yes, I’ve heard all the praise of Clint Eastwood’s desire to portray the heroic foiling of a gun-toting criminal on a European train. Those very same people became angered and aggravated the film received very low ratings from critics, believing they were anti-American for not recognizing the heroism in the tale. Because, you know, those were the real guys. But when compared to the more recent tales of American heroes and the filmography of the legendary Clint Eastwood, The 15:17 to Paris doesn’t quite live up to those standards.

While I think Eastwood has missed the mark with this film, I want to commend him for at least experimenting with his filmmaking style. His other films (American Sniper, Sully) were able to explore the mindsets of his subjects to gain a deeper understanding of the journey they went through. There always felt like there was something more to these men. This is not so much the case with Anthony Sadler, Alek Skarlatos, and Spencer Stone. Being so young, they seem to be average guys of dedicated morals. They grew up in middle American neighborhood and grew up to take military positions that they fought hard to attain. Off the clock, they congregate and have fun, be it watching the game or vacationing in Europe. Rather than try to force some extra drama on their situation, Eastwood takes a Richard Linklater approach by presenting our protagonists as nothing special, elongating scenes of nothing where they tour museums or order gelato.

The truth is that these three guys, along with one British guy that is rarely mentioned, were in the right place at the right time. There’s some premonition dialogue where the characters and their parents believe their lives are leading up to some grand moment, but it makes sense what with their heavy beliefs in God. On one hand, I get it. Eastwood wants to lull us into a sense of getting to know these Americans as your average bunch of military Christian boys that are good natured and fun to have a drink with. I’m sure they are. But in trying to tell the full story of their lives, it becomes awkward and boring to watch at times. Watching these guys meander around Rome and take in a neon club in Amsterdam plays out far too long and with nothing all that entertaining. I’m not sure why the club scene had to show lots of shots of the bartender making drinks and women sliding down pulls. I’m get the idea after the first shot.

But are Anthony Sadler, Alek Skarlatos, and Spencer Stone good actors? In the right context, yes. When they’re at military school or in the fields of Afghanistan, they’re in their element. You can see the determination and commitment in their eyes. But when it comes to the more jokey scenes, which encompass 80% of their scenes, they feel awkward and out of place as Eastwood tries to force the funny. Don’t get me wrong; I’m sure these guys are a lot of fun to be around, but it doesn’t come across on screen where the non-actors appear as deer in headlights. Perhaps it wasn’t the best decision to have a cast that includes comedy naturals Thomas Lennon, Tony Hale, and Jaleel White.

Look, I understand that Eastwood has a throbbing heart for propping up these boys as American heroes, but The 15:17 to Paris doesn’t do them the right amount of justice. What could have been a stirring tale of young men thrown into a dangerous situation turns into a padded and melodramatic depiction more fitting of a TV movie than an Eastwood feature. It has all the appeal of watching American heroes on a parade float. For maybe 10 minutes, you feel a swelling pride for their heroism. But at 90 minutes, it becomes awkward watching them showcased more like prize winners than genuinely good people.