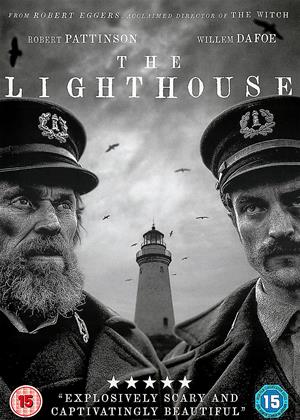 Reviews (23) of The Lighthouse

Didn't resonate with me - The Lighthouse review by NP

I’ve long since wanted to see ‘The Lighthouse’. A slow burning story, with elements of Lovecraft and David Lynch, featuring two powerful actors in an isolated, secluded location sounds exactly my kind of horror.

I’m glad I have seen it. It satisfied my curiosity about what the director of 2015’s terrific ‘The Witch’ would do next. Sadly, as a film, it failed to make any connection with me, or I with it. It isn’t a bad production – the images are stark and beautifully filmed in black and white. The acting, mainly from Robert Pattinson and William Defoe, is intense and convincing – but I couldn’t detect any real emotion, other than the rage that comes with being cooped up with another.

The direction clearly wants to provide us with weird and unsettling images, which it does, but that only goes so far when there isn’t any kind of story, or development, going on – other than bouts of madness, which manifests itself in moments of screaming violence.

Despite everything, all I could see were two men, neither of whom are particularly likeable, shouting at each other, fighting or indulging in grubby personal habits. There are some interesting moments, mostly toward the end, but ultimately, there was nothing here I found frightening in any way. Nor did I find anything funny, or witty or particularly satisfying.

I won’t slate the film because I can see it was well made and performed. It just didn’t have any resonance with me personally. As such, I just found it rather dull and noisy. My score is 3 out of 10.

Gloomy and dire - The Lighthouse review by DM

I am afraid I have to disagree with the other reviews of this film.

I found it very gloomy, dire and did'nt enjoy it at all, in fact I struggled to stay with it until the end.

In my opinion it was a waste of a rental, don't bother unless you like boring films.

Gripping and original - The Lighthouse review by PD

This one probably isn’t for you if you’re after a ‘conventional’ drama / horror / gothic (insert genre of choice) film, but I found it totally gripping, largely due to Willem Dafoe and Robert Pattinson’s mesmerising and deliberately unnerving performances. Director Robert Eggers’ stark black-and-white cinematography emphasises every bony plane, every facial crease, hollow and pinprick of stubble to great effect.

At its heart is a psychological study of two lighthouse workers, Wake (Dafoe) and Winslow (Pattinson), who, over many solitary days and nights, work, eat, drink and dig at each other, establishing a bristling antagonism. In time, their minds and tongues are loosened by alcohol and, perhaps, a simple human need for companionship. The wind howls, the camera prowls, the sea roars and Eggers flexes his estimable filmmaking technique as an air of mystery rapidly thickens. Much as he did in the distinctly creepy ‘The Witch’ with its isolated family of fundamentalists coming unglued in early 17th-century America, Eggers makes the secluded world in “The Lighthouse” at once recognisable and eerily surreal. Wake is the veteran keeper of the lighthouse flame, the guardian of its traditions, language and superstitions (‘never, ever, kill a seagull’, he instructs). He barks orders, sings a shanty, indulges in sentimentality, and is, depending on the mood / time of day, either (seemingly) friendly or (more usually) distinctly threatening. To Winslow’s mounting irritation, Wake also guards the key to the lantern room, and it’s this obsession (Moby Dick style), driven by the demon drink (and eventually kerosene), that becomes what gradually poisons Winslow’s mind, although what ultimately is the source of the madness is deliberately ambiguous. Getting stuck in this place with the company is enough in itself to drive anyone to distraction of course, but the film also hints that our unreliable narrator was never of sound mind even before arriving on the island. The past clearly weighs on Ephraim from the start, with his dreams about drowning under logs at the beginning of the film, whilst later, during his most unhinged moments, he sees flashes of a man killed; as Wake guesses, Ephraim definitely took this awful and secluded job because he's on the run, but as he soon discovers, he can't outrun the prison of his own guilty conscience.

It's also possible of course that both Thomas and Ephraim are having a shared delusion, or we can see Thomas and Ephraim as representing two parts of the same person. There are also subtle and not-so-subtle hints that Wake is deliberately pushing Ephraim into insanity after hearing of how his last wickie died - Thomas could've murdered him or driven him to take his own life. All readings (and more) are possible.

There’s some weaknesses – the Freudian/Jungian symbolism is laid on with a trowel, with endless vaginal keyholes and phallic tools and logs and whatnot, whilst I found the ending, with its blindingly obvious (no pun intended) allusions to the Proteus/Prometheus myth all a bit heavy-handed (I’d got that already; surely it didn’t need to be hammered home in this way?), and for me rather detracted from what had gone before. Nevertheless, taken as a whole, an engaging and original piece.

Is it over yet? - The Lighthouse review by JM

Not the most 'Barry Norman' of reviews, sorry

I couldn't hear most of it as they mumbled their way through it, rather annoying 'background music' left me feeling like the seagull that gets battered against the tank.

Shocked and disgusted to notice this movie is in Black & White and in 4.3 ratio which usually are old TV series from the 70s and not the movies which are in wide screen. Tried to bear with it but it so gloomy and boring that after 10 minutes, switched off. Why there is no mention that's it's in B&W?

Shiver me timbers I won't get the time back. - The Lighthouse review by JA

This film could have done with the same. Perhaps a different story, director and cinematography which combined made it look like a parody of a bad idea.

Other than that it's a great film.

Not worth investing your time to view.

Complete waste of time and effort.

Stuck with it as kept thinking it might turn a corner but it never did.

Sack the director! - The Lighthouse review by KF

Black and white. what a tired old yesteryear luvvie trick to try and inject some atmosphere. And why not wide screen? The pity is is that it could have been more than half decent (if not still rather grim and dark) without the misplaced directorial decisions.

promising then dire - The Lighthouse review by DT

Terrific actors and atmosphere squandered. Just got sillier and sillier, yet somehow also predictable in the end.

We found this movie slow going & boring , waste of a Saturday evening. Gloomy did not enjoy.

Though contained to both the lighthouse structure and its 4:3 aspect ratio, The Lighthouse feels as though it exists among the cosmos for its psychological questioning of existence and human nature. It occupies trapping of the mind, echoing Robert Eggers’ previously frightening flick of The Witch, where characters can feel the shadows of evil closing in from all sides. It’s an oddly uncomfortable nightmare of a picture in all the right ways that horror reaches into our souls, finding the most unorthodox tension-riddled strings to pluck.

It’s 19th century New England and the young Ephraim Winslow (Robert Pattinson) has just taken a 4-week contract at a lighthouse. For the next few weeks, he’ll be housed with the aged and gruff Thomas Wake (Willem Dafoe). Shot in black and white and within a confined and dark environment, it’s looking as though Ephraim is going to be in for a very tough and dull time as he tends to the duties of the lifehouse. They maintain the structure while keeping themselves occupied with cooking and conversing.

But the days drag on and much stranger things start to occur. The presence of a seagull seems to be more sinister than one would think. Then there’s the appearance of a mermaid and a questioning of sanity soon arises. It isn’t long before a brooding sense of mistrust starts brewing within the duo, leading to them despising each other. Even something as routine as cooking comes into question as the days wear on and the count of their time in the lighthouse is lost. How long have they been there? They don’t know. How much of what they’re experiencing is their reality and not brought on by a warped psychosexual insanity? They don’t know either. More importantly, we don’t know, giving off the same sense of fear and paranoia the characters feel in their dimly lit world.

Pattinson and Dafoe are absolutely electric in roles where they throw their entire souls into the performances. Pattinson has that allure of a quiet man with an internal fear that resonates throughout where he fears he may not be in the right state of mind. Dafoe perfectly portrays a lost soul so deep in his own muck that he cant see the crazy that has buried him in lobster-infested psychosis. There’s intimidating nature to him in that sharp contrast that makes one feel as though they’re just as trapped within his world, struggling to make sense of it all.

The Lighthouse is a deeply uncomfortable and tense film filled with imagery that is surreal, interactions that are chaotic, and an overall atmosphere that creates unease in dabbling into contents of the human soul, from perceptions of reality to sexuality. Moreover, it’s not an easy picture to process either, begging one to beckon the screen the same way Pattinson stretches towards the lighthouse light, paralyzed by what may lay beyond and terrified if there’s nothing more than seagulls at the other side to peck our guts out. What seemed as though it could only exist within a novel, Eggers brings that off-putting sense of loneliness and haunting nature to the big screen in a manner that no other director could process so well.