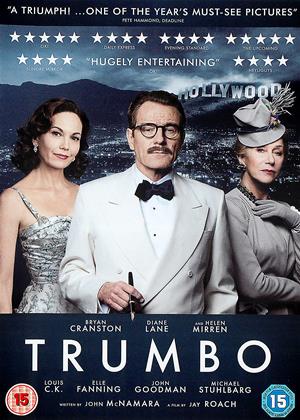 Workmanlike movie about the screenwriter blacklist and McCarthyism. - Trumbo review by PV

This is a very workmanlike movie - all well written and directed and acted - but somehow a bit cold an efficient.

Anyway, the story is fascinating. It's about how the 'UnAmerican Activities Committee' of the late 40s and 50s (though it didn't end till 1975 officially) conducted a witch hunt against those whose views and thoughts and political opinions were of the left and particularly the Communist party.

Now, many were sympathetic to the Communists before, during and just after the war, as Russia and the butcher Stalin were our Allies. However, most saw how vile Stalin and Russian Communism were in the 50s, especially when the Soviets sent tanks into Hungary in 1956.

These days, we also have our witch hunts so no-one watching this film and shaking their heads should feel smug. We have witch hunts now - anyone who refuses to abide by the often absurd ideology of political correctness and diversity worship can find themselves the victim of a witch hunt. A TV producer saying Midsomer Murders is popular because it is not set in the modern inner city full of ethnic minorities finds himself the victim and loses him job. Harvard professor who suggests boys and girls may be innately different in their brain and behaviour and aptitudes loses his job after mobbing by witch hunting feminists. Anyone suggesting that 'affirmative action' or the UK version 'positive action' is racist, sexist and wrong is likely to lose their job. Anyone saying that we do NOT need the Oscars rigged to ensure more blacks win Oscars is sure to be blacklisted by Hollywood these days if they are an actor or a director.

Nothing has changed! We still have victims of witch hunts now. And any screenwriter now who dares write about certain topics will NOT get their screenplay made.

btw this movie makes it seem easy to be a screenwriter. Well, people say if you pack your bags and go to Hollywood it'll take you 15 years to get a script made on average. In the whole USA no more than 12000 people made alive writing for TV and film and that is 2000 in the UK.

But, despite the way this is a very worthy and smug film, it's also interesting - and the introduction of Kirk Douglas and Spartacus is great (though several people wrote that screenplay and several directors worked on that movie).

We really enjoyed this film, the performances were great and it's fascinating historically. We would recommend it without a doubt, especially if you are interested in Hollywood and the machinations.

Relatively pleasing - Trumbo review by BE

Quite enjoyed this movie although at times, having displayed excellent acting skills in 'Breaking Bad', Bryan Cranston looked at times as though he was acting and his characterisation looked laboured. Original historic footage around the time of McArthy mingled well with the movie scenario of the 1950s. I was well aware of the McArthy witch hunts and this film is probably a good representation of that era for those who need enlightening. My only other reservation is that whilst Trumbo aged as the film progressed thru the years, his wife must have taken the elixir of youth as she didn't age one dot! Not good.

Reds Under The Bed - Trumbo review by Count Otto Black

The background to this semi-fictionalized but more or less historically accurate film is both fascinating and almost unbelievably bizarre. The House Unamerican Activities Committee's "witch-hunts" ruined thousands of lives and careers and drove some people to suicide, despite being not only a blatant mockery of America's proud tradition of free speech, but so paranoid that at one point the HUAC famously claimed the New York Times had more Commies on its staff than the total number of people it actually employed! All of which arose not only from America's reluctant pact with Stalin to defeat Hitler, but pre-war tensions arising from the terrible conditions the working classes endured during the Great Depression (see "The Grapes Of Wrath" starring Henry Fonda for further details), which caused many of them to become so left-wing that there were genuine fears of a Soviet-style revolution in the USA.

Unfortunately, this movie covers one of the least interesting aspects of the whole sorry mess, which has received more publicity than the rest of it because many of the people involved were extremely famous. A small group of Hollywood screenwriters with minimal connections to international Communism who were no threat to anyone were treated unfairly, some of them went to jail for not all that long, their lifestyles became middle-class instead of rich, and they had to write scripts under pseudonyms until it all blew over. Dalton Trumbo is, as heroes go, rather an unlikely one. His "heroism" seems to be at least partly the result of being unable to back down because of his massive ego, he goes to jail by mistake because his bluff fails through sheer bad luck, and churning out pseudonymous scripts for crappy B-movies (some of which - "Gun Crazy" for example - were actually very good) because his family has to eat is no more "heroic" than Bela Lugosi starring in Ed Wood films when no-one else would employ him.

As he's portrayed here, Trumbo is a difficult person to like, though some of that may be down to Bryan Cranston's odd performance. I assumed the over-the-top way he talked and acted must have been forced on him because that's how Trumbo really was, until an archive clip of the real Trumbo during the closing credits revealed that he sounded nothing like that. So why play him in such an artificial way? And John Goodman as a slightly grittier version of the character he played in "Matinee" is trying to provide comic relief in a totally inappropriate context.

It really tries to make an important point, and it's very good on all technical levels, but it feels like a TV movie that's trying too hard to please everybody, and is therefore scared to talk about politics in case some viewers are bored, so instead we see rather too much of Trumbo's clichéd and unrealistically easily fixed domestic troubles. By far the best treatment of McCarthyism is still Arthur Miller's play "The Crucible". It's ostensibly about hunting actual witches in 17th century Salem, but everybody knew what it was about really.

I had never heard of this movie until I saw it on the Cinema Paradiso website, but I am very glad I discovered it. Rip-roaring yarn it ain't, nor is it a classy thriller, riveting romance or whatever, but it is a very interesting bio-pic, well told and always compelling. The background will be familiar if you have seen films like "Good Night, and Good Luck", but I doubt the titular character Dalton Trumbo will be, and I simply enjoyed seeing his story played out in familiar David and Goliath fashion. The period detail is great, both the stars like Helen Mirren and the many unknowns in leading roles give excellent performances, and the whole thing adds up to a very pleasant 2 hours viewing. Thank you, Cinema Paradiso, for alerting me to its existence.

Bryan Cranston was excellent in Breaking Bad, but here he is very wooden and cold. Interesting historic film about the communist witch hunt in Hollywood, makes a good documentary but not an exciting film. I found I could not get interested in any of the characters. I just wanted it to end.

I enjoyed this film very much. I give it 5 stars. The acting was excellent. Best film I have.. seen in a long time.

For many, the most outstanding 'magic' they will walk away with is the scriptwriting, which brought an incredible third dimension to this outstanding movie. The lead role, played by Bryan Cranston, was indeed deserving of an award.  I find it strange that film critics can be so laboriously picky, many thinking it is their duty to undermine the endeavours of a hundred people who have succeeded in producing an incredible work of art.  This is a great picture for the mature adult and and will prove an education for many.  In such documentaries, there are always inaccuracies which are frequently pounced upon.  However, there are some things, when creating a movie, that simply don't work and they are altered to bring about plausibility, believability and credibility.  This applies to all movies, fact or fiction.  Such movies are rare, simply because they carry the risk of not recovering their costs.  Regardless of this, it was brilliantly directed and the cast were able to set their talent free.  I hope it becomes a classic.