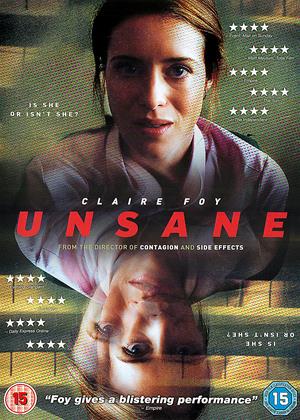 Incredible...and not in a good way! - Unsane review by TR

I really don't think someone would mistakenly commit themselves to a psychiatric facility, so as the whole film falls on this premise. The rest is just acting and accent practice for Claire Foy (American) and Juno Temple (Texas drawl). Nothing much else here is of much interest here, and if the Claire Foy character was less obnoxious, it might be a bit more interesting. "One Flew Over The Cuckoo's Nest" it most definitely ain't.

Not a bad tale, some suspense, twists and comments on the system - Unsane review by NH

The main character believes she is being stalked, is committed to a facility due to her answers in her counselling session. The plot gradually thickens and overall is a reasonable thriller - for at least two thirds of the film one isn't sure if she should be locked up or not!

Only lasted 20 minutes into this film. Found it really boring and annoying to watch. Would advise giving it a wide berth.

Awful - Unsane review by ME

absolutely a waste of time. not a lot happens and when it does its ridiculous. watch something else

If the rating system would’ve allowed a rating of zero, then that’s exactly what this film would’ve got.

It reminded me of a god awful film I watched a few years ago called ‘Compliance. That film and this film are so stupid and unrealistic it beggars belief. I know films are over dramatised and exaggerated but please; this was just plain stupid.

Both of these films are based in America and all this film makes you think is that there really must be some dumbasses in America if something like this is even feasible.

Please don’t bother with this film and if you happen to stumble upon it, the film compliance also.

Steven Soderbergh always finds a way to surprise as a filmmaker. He directs Unsane with a firm grasp of the camera and the acting so that the rather predictable and twisty plot doesn’t bore, jolting some shock into what could have been a tired production. He manages to create an intensity within his 4:3 presentation than most thriller directors could muster with a 2:1 ratio. And while he may be lacking in mystery, his effort is oozing with an atmosphere to always keep the eyes glued.

Claire Foy does an amazing job playing Sawyer Valentini, a woman always on the edge and paranoid about the world that has wronged her. She has a stalker and finds herself fearfully peering over her shoulder that some man could turn to the same evil. Seeking help, she stops by a mental institution for some support. But, wait, now she has been committed. Funny, she doesn’t remember signing those commital papers. In fact, she’s positive she didn’t sign anything like that. Or did she? She wants to get out, telling the orderlies she doesn’t belong here. She’s all the more anxious to leave as she believes her stalker is working within the facility, having seen him handing out the pills. Or is he?

While Unsane initially sounds like a mystery, it only remains one for the first act. In a few ways, this is disappointing that the film doesn’t follow through with this aspect. On the other hand, it does remove a certain sense of seeking the revelation. Once revealed, the film still proceeds down a dark and furious path of Sawyer’s voyage through questionable sanity and survival. It shifts tone into a thriller where we know the truth Sawyer has yet to discover. An issue with medication and disbelief of her unwillingness to cast doubt on her mental stability weaves a surreal web, including plenty of scenes where she freaks out about how her world seems to be crumbling around her with trust draining.

Soderbergh’s direction is in top form here. I love how the lighting always seems just a little bit off, casting bigger shadows in large and closed environments. The camera gets incredibly ghost with a wonderful use of filters to always create a nightmarish state. There’s also a great use of effects, as in one scene where Sawyer loses her mind as she runs around the room, different footage bleeding over screaming audio to create a sense of frantic terror. And there’s a classic charm to that final shot of freezing the frame and zooming in on the next move made by the character. It may seem cliche, but there’s always something about that kind of capper that gives me goosebumps if it’s earned well. Oh, yes; Soderbergh earns it.

I feel the need to point out that Unsane should be treated more like a thriller than a mystery. That annoying viewer who always watches with a repeated line of “I’ll bet I know the ending” will probably dismayed that their “called it” moment comes too early and there’s no game for them to play. But those seeking a well-made thrill of one woman struggling against her grip on reality, her trust of others, and a violent trip down her path built from paranoia, you’re in for another stylish treat Soderbergh as a filmmaker that rarely disappoints.