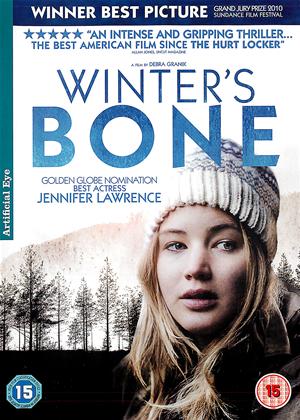 Different and worth watching - Winter's Bone review by PV

I enjoyed this film. It's so unlike so many US films, and I enjoyed it for just that, for a start. I liked the sinister tone - though the country hick scenarios are perhaps steroetyped a bit too much. I liked the way the film had much of the colour sucked out of it - like the nordic addict hillbilly characters' faces! It drags a little in the middle, but generally keeps the pace going OK: the plot points come dead on cue and power the plot along in a way movies like this usually fail to do. I liked the gruesome scenes too - believable, up to a point. The one thing that irritated me - and this is common in movies filmed by women - is the way all the male characters are portrayed as baddies and all the women as goodies - gentle little things who are such victims of men and suffer so much. Sexist is the word! Patronising too. The female equivalent of a male director only using women as eye candy. But anyhow, it's WAY better than the kind of silly romantic 'comedies' most female directors seem to make. Different and worth watching.

A slow start and the pace doesn't improve greatly throughout but quite an interesting film nevertheless. Quite chilling to think that people could act in the way that they are portrayed in this film or live in such conditions but they probably exist.

The subject matter is pretty disheartening, a community driven by drug making and drug use because it is so utterly desolate. Governed by murderers who threaten police and beat up single mothers trying to find their father.

The acting wins through and transforms this from a potentially awful experience to a personal one filled with determination and endurance.

So good to see a decent US film for once: no CGI or gratuitous sex or ludicrous chase scenes. My wife has visited these areas and this is accurate. Serious drug problems amidst the poverty entwined with criminality and clannishness. I usually take my films world-cinema and want a sense of humanity and the lived world. This spoke to me of raw living in the Ozarks and called on my compassion in spite of the darkness. Perhaps the directorial touch of a woman helped but this is cinema as an extension of literatiure not as an adjunct to telly. Great stuff.

Refreshingly un-American even if the ending was a little too upbeat for my 'World Cinema' taste. Very well worth watching even if not quite in the top drawer.

Jennifer Lawrence at her best. - Winter's Bone review by Bullitt 68

No overacting, no stunts and nothing unbelievable. An interesting story told with excellent acting set in the "harsh environs of the Ozark mountains".

It will not cheer you up or inspire you. It is grim but, that is why it draws you in, because it is believable and you care for Ree Dolly and her family.

Excellent films do come out of America, refreshingly this is one of them.

Terribley, in fact frustratingly slow movie. Completely overated. Lots of long pauses between the actors. You could edit this film down to half an hour. There is little us brits can relate to in this film. Watch something else!

Seventeen-year-old Ree Dolly (Jennifer Lawrence) is no ordinary teenager in the Missouri Ozarks. Her mother is catatonic so she has stepped up in caring for her and her two younger siblings. Her father’s no better; he’s hiding because of involvement with drugs, and he has set up their only home as bond. The sheriff (Garett Dillahunt) informs her that if her father doesn’t surrender, they will be forced to leave.

Before they become homeless, Ree sets out to find her father but her hometown isn’t exactly a welcoming place. Besides the biting cold, most of her neighbors are destitute and have meth labs of their own. They want nothing to do with Ree, including her Uncle Teardrop. If Ree can’t find her father, what happens to her and her family then?

Directed by Debra Granik and based on the 2006 novel of the same by David Woodrell,‘Winter’s Bone’ is an all-too-real depiction of the filthy poor living in the US. This is the un-glamorized American Dream wherein the objective is to get through the day alive, whether it’s cooking meth or hunting for squirrels as food.

Jennifer Lawrence is feisty and strong but also exudes the vulnerability of someone who is burdened by responsibilities that are not her own. She is a teenager, after all, and with every step she takes to find her father, her existence is uncertain and always in peril. ‘Winter’s Bone’ was nominated for four Oscars, a Best Actress for Lawrence, Best Supporting Actor for character actor John Hawkes, Best Adapted Screenplay, and Best Picture. The film was lauded by different award-giving bodies and critics alike.

‘Winter’s Bone’ is a young girl’s coming-of-age story with poverty as its main antagonist. Its heroine, Ree Dolly, is uninterested in going to the mall, meeting cute boys, or having a dilemma what to wear. She has ‘real’ problems to deal with and it includes everyone and everything around her. This is her miserable life but a life nonetheless.