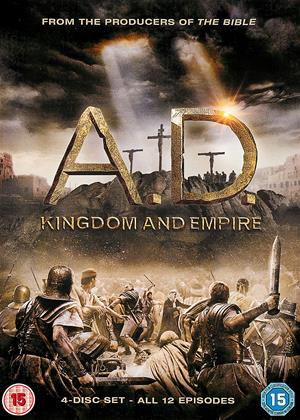 Reviews (2) of A.D. Kingdom and Empire

There are all the panoramic vistas and action of an old Biblical epic but the attention to visual detail is rather cancelled by other factors which try to make this drama "relevant" to a modern audience. Firstly we get an obviously multiracial-looking cast of disciple figures who are supposed to represent all peoples of the earth. There are also consciously feminist themes introduced, mainly expounded by the wives of Caiaphas and Pilate where they frequently challenge their husbands' ambitions and decisions. The dialogue is needless to say, modern to the extent that etiquette is stretched and there is a familiarity and informality between characters of different social standing which are not at all convincing for the historical period. There is emphasis too on the emotional in conversions rather than the immediate cultural and ethical re-orientation that new believers have to come to terms with: often it looked too much like the traditional altar call experience.

All the actors seemed to be British in this American directed epic: was the idea to give a more Shakespearean air of profundity? Some seemed to be too British for their roles,however, like the High Priest, though he delivered well and the minor roles were much more convincing, as a matter of fact. The role played by Caligula was especially well-done, in fact the roles of the more wicked characters were more successful as a rule. The character of Saul/Paul was played with a rich Irish brogue which made it difficult to be convinced that this character was "a Pharisee of Pharisees and a Jew of Jews"! I wondered if his conversion to Christianity was to be a reference to the Irish reconciliation in more recent history: the former militant IRA terrorist becoming a Protestant peace-loving believer. The multiracial idea would be more appropriate in the theatre with minimal scenery where the message there is more important than the outward form but it does not work in epic film-making.

I haven't done the research but it looks like the narrative of this film has taken real characters in the Acts account, such as the Centurian Cornelius and the Ethiopian Eunuch, and given them an imagined, if not contrived, context, that links all the incidents of the Acts story of the Bible together in a way that all their paths cross and the two themes: Kingdom (God's) and Empire (Pagan Roman) are quite tightly knitted together in a dramatic whole. As the historical accounts are sketchy this licence has been taken to make an entertaining and fluid drama if not wholly convincing.

I found this program disappointing and dull. The cast seemed unconvincing apart from Jesus, who looked the part. It all just didn't work for me. I gave up in episode 3.