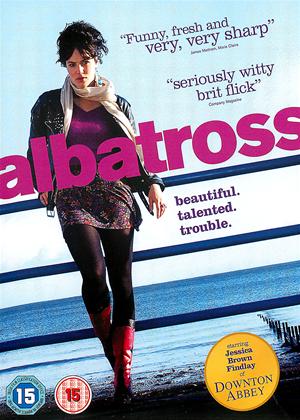 Easy viewing, mildly amusing--wouldn't put it in my top ten. Nothing to get your teeth into, but OK for a Sunday afternoon!

Albatross is touted as being about the friendship of two girls from different backgrounds (sounds good already) and one of them is played by the very beautiful Felicity Jones. However, the film is actually one of those cliche-ridden movies which involve two writers - one old and established but hasn't written anything for years and the other young and still working on their very first novel, and, as usual in such movies, you see the writers doing stupid things, like filling the laptop screen with the word 'Fuck' (how original!) or writing a couple of lines on a piece of paper and then screwing it up and chucking it in the bin. Presumably there are or were indeed writers who did stuff like that, losers, but I imagine that the vast majority of writers are, like myself, actually not as stupid as that, but in fact keep almost everything we write, and learn from our mistakes. Also, paper is quite expensive. So, if you're a writer then don't bother watching this trash; but if, like me, you think Felicity Jones is beautiful then this is the film for you (but keep a thumb on the fast-forward - you're going to need it).

Albatross is the British coming of age drama comedy starring Sebastian Koch, Jessica Brown Findlay and Felicity Jones. It tells the story of would-be-writer Emelia who takes up temporary work as a cleaner in a seaside hotel run by an accomplished writer (Koch) attempting to recapture the success of his earlier writing.

Whilst working there Emelia (Brown Findlay) strikes up a friendship with the writers’ daughter Beth (Jones), who has been feeling isolated and unsure at home as her parent’s marriage begins to fall apart. Emelia soon finds herself becoming involved with the writer, which poses dire consequences for her burgeoning friendship with his daughter.

Many have praised this movie for its even balance of drama and comedy, yet I personally found it was a little too gentle for my liking. The characters seem like archetypes of the Brit-indie genre; and just lack much originality and personality.

It’s not that I didn’t enjoy the film, it was utterly charming, I liked the characters, I cared about them and what happened to them, the script was great and the humour very nicely juxtaposed to the drama, but there was just very little about the piece that stood out particularly.

It could have been any other film and these could have been almost any other cast: Sebastian Koch was excellent but his performance was nothing on his appearance in The Lives of Others, whilst the personalities of the characters just seemed a little one dimensional and bland. Unfortunately this movie just didn’t spark for me and as such doesn’t really fulfil its potential to be truly great. There are far better indie comedy dramas kicking around the UK at the moment, unfortunately Albatross just didn’t do it for me.