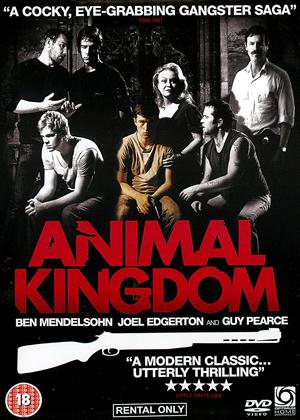 Synopsis:
Following the death of his mother, the young 'J' Cody goes to live with his estranged gangster relatives. With conflict escalating between his family of criminals and the police's armed robbery division, J finds himself at the centre of a cold-blooded vengeance plot As he naively navigates his way through the criminal underworld, he is forced to question where his loyalties lie as he tries to decipher who he can trust and who can protect him as he struggles for his own survival.
Actors:
James Frecheville, Guy Pearce, Joel Edgerton, Bryce Lindemann, Paul Smits, Jacki Weaver, Luke Ford, Sullivan Stapleton, Mirrah Foulkes, Anthony Ahern, Justin Rosniak, Michael Vice, Chris Weir, Laura Wheelwright, Sarah Nguyen, Lucia Cai
Directors:
David Michôd
Writers:
David Michôd
Others:
David Michôd
Studio:
Optimum
Genres:
Drama
Countries:
Australia
Awards:

After the death of his mother from a drugs overdose, teenager Josh goes to live with his grandmother Janine (aka "Smurf") and her family in a suburb of Melbourne, Australia. Josh (aka "J") falls in with the criminal life of his uncles, 'Pope', Craig and Darren Cody who have bad habits such as drug dealing and bank robbery. The Cody brothers are under police observation and not only are they criminals but also appear to be a bunch of sociopaths and psychopaths with a tough and protective mother who has a close, almost incestuous, relationship with them. Pope's friend Baz Brown (played by Joel Edgerton, who played one of the lead roles in the recent 'Warrior') acts as role model and mentor to J but is shot by the police. Events spiral from bad to worse as the unpleasant, unpredictable Pope shoots two cops in revenge and suspects both J and his girlfriend of talking to the police... The film is slow moving but shows the unpleasant underbelly of life in a criminal family intermingled with police and legal corruption. J is forced to question where his loyalties lie: and when he decides, it makes for a strangely satisfying ending. 4/5 stars – highly recommended.

Tasty, nasty, violent film starts off focusing on the exposure of a relatively sheltered teenager to the machinations of a depraved criminal family, going crazy under threat. About halfway it takes a turn into the heart of darkness of the family's astonishingly pragmatic and vicious mother. Then it really takes off courtesy of Jacki Weaver's staggering portrayal.

Seventeen-year-old Joshua ‘J’ Cody’ (James Frecheville) has just lost his mother to a heroin overdose and now an orphan, he reconnects with his grandmother Janine ‘Smurf’ Cody (Jackie Weaver) and his uncles – and immediately in the film ‘Animal Kingdom’, you know it’s not a great idea.

See, the Cody family isn’t exactly as warm as apple pie – it’s more a crack den with criminals in it. The last thing an impressionable teenager needs is to be mentored by walking bad influences. As J is being taught the Cody family business – robbing banks, killing cops, evading the law – a detective named Leckie (Guy Pearce) wants him to help the police out in taking his own family down. Where does J’s loyalty lie? Is there one to begin with? And what life is waiting for him if he chooses either side? Clearly, J is with the bad guys, but should you turn your back on your only family just because they are?

Dilemmas, moral and practical, are evident in the riveting tale of the Cody family in the Australian production ‘Animal Kingdom’. It is the first feature-length film of writer-director David Michod, whose depiction of a crime family dynamic is reminiscent of ‘Goodfellas’ and TV’s ‘The Sopranos’.

Headed by its smarmy matriarch Jackie Weaver, her Smurf is a lioness of a momma, who passionately loves his boys that she’d do just about anything to protect them. His ‘boys’: Joel Edgerton, Sullivan Stapleton, Luke Ford, and the frightening sociopath Ben Mendelsohn present grim examples of J’s future, should he decide to join and be like them. Guy Pearce is a reliably competent actor and he is the catalyst that will make J re-evaluate how he wants to live. James Frecheville’s J gives a quiet performance, blank and unfeeling, that sometimes you want to shake him to realize the mess he is actually in. But he is us, the audience, who traipses the Cody hellish world.