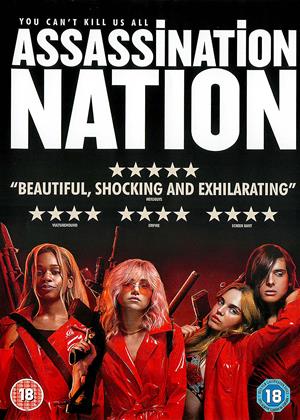 Gird your loins for pure adolescent moron overkill, stuffed with idiot teenagers that are painful to watch. Expect lots of sexting, swearing and partying to forgettable pop muzak, with an inane voiceover to make it seem even worse.

The plot involves someone revealing people’s hidden secrets over the web. The four high school girls at the centre of the film are so intensely grating that when violence erupts it’s them you want to be eradicated. The DVD out-takes worryingly show them being equally moronic in real life.

An Insufferable bunch of High School Girls becomes the Brunt of Hate for an Entire Town after an Internet Hacker releases Everyone's Private Business online.

Suicides ensue, People loose their lives and livelihoods, Careers ruined, Politicians taken down ,and Lies Abound all over Town about Everyone Living there .

The Townsfolk take Justice into their own hands and a Public Lynching Ensues.

All Out War is the Outcome .People Die .people Get Even,Things Get Messy.

Slow to get into ,Irritatingly Slapable Characters that almost ask for what they get

....But NOBODY Deserves to be Murdered ,Raped,Beaten,Hanged,Water Boarded,Drowned,Shot,Degraded ...Do They ?

Vicious Movie showing How Low the Human Animal can go .

Out of Control when a Crowd gets Angry. Frighteningly Real in Today's Far Right Leaning Times.

A Lot of Women being Degraded in this movie buy Sexist Pricks ,But Thankfully they get their Own Back by the End !

Split down the middle - Assassination Nation review by AM

this film split our household. I loved it, my wife hated it and the 3 star rating is an average of four stars and one star. We agreed the concept, (a witch-hunt (set in Salem, but not THAT Salem) in the aftermath of people's internet activity becoming public knowledge) was interesting so the average is rounded up.

On one hand, it is a delightfully OTT black comedy reveling in the gore as society spirals out of control. On the other, it is a film which starts off with annoying central characters which gets worse as the film shifts through the gears of it's plot changes.

OTT or stupid? I think that's the dividing line, and which side of the argument you are on I cannot tell.

I suspect that this film is aimed at teenagers. I rarely give up on films. With this one, I switched off after about 15 minutes.

The first half of this film seems to operate on the incorrect premise that anything you post on the internet is private until there is a 'hack'.

Guess what? It's not.

The girls aren't to blame though. It's sochal meeja's fault.

Guess what again? It's not mandatory.

Then the consequences of their actions catch up with them. Shocker.

Assassination Nation touches on something deeply disturbing of online mentality. There’s a focus on how the dependency of the flow of information breeds a sense of false security and mob mentality, where a revealing flood of concealed truth can turn monstrous and inhuman without a hair of scrutiny until it’s too late. I want to emphasize that the film merely touches upon this aspect and never digs deep, merely scraping the surface of the concrete to extract some horror thrills out of the online mob premise.

The town of Salem is currently rocked with controversy. One curious hacker happens upon a plethora of leaked information about Mayor Bartlett. The mayor has apparently been very much against homosexuality but had a series of sexual photos unearthed of him in very homosexual acts. This sends the town into a heated stir and the mayor into a tailspin of regret where he takes the only way out he can fathom; a bullet to the brain in front of an audience to witness his sacrifice.

Taking a strange comfort in finding out this information is a collective of outsider high school teenagers. Lily Colson (Odessa Young) hangs out with her friends at school doing more lounging than school work, taking an interest in all the juicy town gossip and revealing hacks. Their response is as natural as the rest of the town, believing Barlett got what he deserved for being a perverted hypocrite. This goes double for Lily’s transgender friend Bex (Hari Nef).

But then more hacks come out. More sexual secrets that create an unease of controversy throughout Salem, where the bitter and repressed explode on those exposed. Pedophiles become targets where their houses and vandalized. Teenagers with sexual affairs will be harassed and assaulted. The public will demand those found to be morally objectionable, be they hypocrites, pedophiles, or sluts, will be shamed in public, forcing them out of society. And when all of society forces you into a corner, you start to get violent.

I’ve heard the film compared to a pairing of Mean Girls meets The Purge, where all the mob mentality of the internet reveals leads to chaos about the town of murder as a means of cleansing. And there’s a lot to say with such a premise. It’s just unfortunate that the film seems more about bathing in the bluntness of its exploitation premise. There’s a moment right before the carnage of the girls being targeted brutally as scapegoats that the ensemble idolizes female revenge films, hoping they can make some when they grow up. Now they’re living one with all the viciousness and violence that comes with such a film.

Assassination Nation is more interesting for the questions, even if they’re mostly through blood-soaked whispers as it embraces more of the terror than the commentary. It becomes so lost in the muck of its action and horror aspects that the message comes slamming into the last few minutes of a big middle finger to a society that judges when all contain some guilt. But, hey, it’s a needed middle finger that’s worth holding up with all the profanity, the fingernail covered in blood.