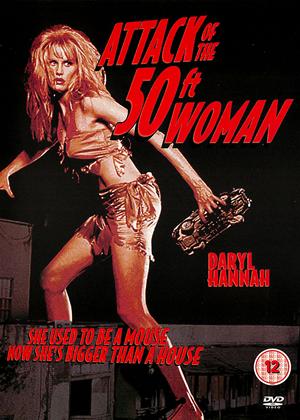 Synopsis:
Heiress Nancy Archer has discovered her no-good husband Harry's cheating on her with the town bimbo. He's even plotting to get his dirty mitts on her money! But an alien encounter with a passing UFO has given Nancy extraordinary powers, and when enraged she can grow to a height of 50 feet. Endowed with newfound feminist consciousness, giantess Nancy strides off on a mission of vengeance against Harry - and all those who have ever 'done her wrong'!
Actors:
Daryl Hannah, Daniel Baldwin, William Windom, Frances Fisher, Lewis Arquette, Xander Berkeley, Cristi Conaway
Directors:
Christopher Guest
Studio:
Infinity
Genres:
Sci-Fi & Fantasy

Rent other films like Attack of the 50 Foot Woman

Spoilers follow ... - Attack of the 50 Foot Woman review by NP

Wronged woman Nancy (Daryl Hannah) gets zapped by a laser from a flying saucer and as a result, grows to giant size whenever she gets angry. With a premise like that, how could so much of the running time have turned out to be such dull viewing?

And yet, all the ingredients spell better things. There is a phoney, tongue-in-cheek recreation of 1950s America, in which actors are encouraged to overplay events to make it clear we’re not to take them too seriously. There are some (presumably) deliberately cheesy effects to replicate the style of B-movies of that era (a genre in which the original 1958 version of this snugly fitted). Problem is, whilst everything is competent, the script isn’t terribly funny, nor is it poignant despite Hannah’s vulnerable appeal. Chunky philandering liar and cartoon husband Harry (Danny Baldwin) balances well a hateful and comedic persona.

As you may imagine, her increased stature gives Nancy a sense of empowerment. No longer a wallflower, she still makes it her business to track down her errant husband. Yet it isn’t solely personal empowerment she feels, but a strength on behalf of all women, giving this a feminist flavour, all the while looking great in a cavewoman-style outfit. Hannah carries the fifty-foot look very well, and is lithe enough to actually convince. She isn’t perhaps the most personable actress, and it occurs to me from time to time, for someone of her renewed gravitas, she underplays it somewhat. The image of this towering, haunted victim of circumstance dazedly and pathetically scanning the streets and calling out her husband's name in the doomed hope he can help her, however, is effective.

The ending sees Harry, and a handful of other presumably deceitful/unfaithful men put very much in their place by Nancy, who has now been reclaimed by the flying saucer and is in the company of other 50 foot women. Whether this is supposed to be seen as one ‘in the eye’ for menfolk or philanderers everywhere, is unclear.