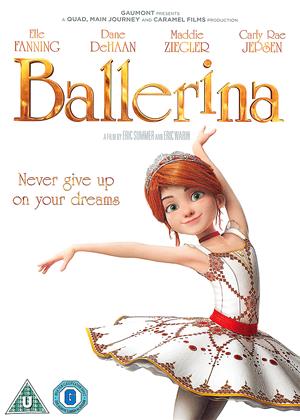 I wanted to root for Ballerina. Really, I did. Animation is expensive and competitive, especially in the realm of computer animation where a bigger budget is a requirement for quality. But there was some hope for this picture to become the underdog animation of the underdog story. I’ve seen it done before. Pixar and DreamWorks don’t have to dominate this medium. And while Ballerina certainly puts forth some effort in its animation, it falls flat with a story that stumbles greatly while trying to look graceful doing it.

It’s the story of Felicie, a young orphan that dreams of becoming a ballerina. Her friend Victor, another orphan who specializes in inventing faulty contraptions, helps her escape the orphanage and the two make their way to Paris to follow their dreams. You’re going to be hearing a lot of forgettable dialogue about following dreams and being true to yourself, so settle in. Odette, a former ballerina that will eventually Mr. Miyagi the chipper Felicie into a dancer, takes her in. She’ll need all the help she can get as she tries out for the Nutcracker ballet. The instructor is strict and won’t stand for Felicie’s amateur moves, which bode well for freeform dancing, but not for a coordinated ballet. She’ll also have to contend with the snotty and rich ballet dancer Camille that is willing to do anything to win that part.

There isn’t much tension in Felicie’s predictable rise from orphan dancer to ballet dancer. There is, however, some inspiration in the animation. The ballet sequences are well choreographed, based on real ballet dancers no less, that every scene where Felicie is training or performing is a marvel, transcending the obvious limitations of the budget animation. Computer animation may require a lot of time and money to render out decent lighting and textures, but quality movement still comes from the skill of animators. Every scene where the characters are in tutus made me smile, even during the film’s silly climax where Felicie and Camille duel with ballet in a scene better suited for You Got Served.

The problem is that the film comes loaded with so much extra baggage of extra plot and characters that appear more as though the filmmakers are meeting a quota for bland animated films. Victor exists in the picture as Felicie’s love interest, but only in bits and pieces for moments of slapstick as he busies himself with helping out on the Statue of Liberty (or the Statue of Puberty as he calls it). There’s an extended motorcycle chase where the orphanage muscle tries to capture Felicie and Victor, bumbling and grumbling as he speeds towards them. Camille’s mother is a domineering figure that is the true villain for forcing her daughter into ballet, but did she really need to chase Felicie with a sledgehammer for an action sequence? All of this is just excessive junk in a picture that could have been a sweet tale of a ballerina in the making.

Ballerina could have been an effective animated film, triumphing over its own budget adversity, but it tries to be too safe and stale, as if the executives feared kids would be too bored with a film about the ballet. The frantic nature of chase scenes, fart jokes, overreactions, obvious ADR (Mel Brooks continues to speak over action sequences with nothing funny for his character to say) and the insertion of pop music makes the film com off as terrified to be anything different from the multitude of animated movies out there. It’s a movie that has the skills to be an original work with great emphasis on dance, making it a major disappointment when it falls in line with other forgettable works.