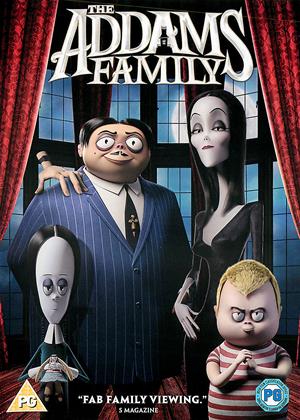 Reviews (2) of The Addams Family

Huge let down - The Addams Family review by TH

I loved the 90s film and sequel of Adam's Family. I was looking forward to seeing what they could do with the animation. However this film was just flat. The animation looks dated and the voices are rather bland. Think I would rather just watch the 90s film instead.

The animation is refreshingly quirky but the storyline & script are disappointingly bog-standard. The series and the previous films were much funnier and it's a shame that with all the vocal talent used they couldn't spend more time to make it funny.

It’s sad to see such a wickedly fun concept as The Addams Family being saddled with the kid gloves. Among the illustrations, television series, cartoon series, and movies, I can safely say this is the safest depiction of the odd family with Munster mannerisms. The hilarity of morbidity is given a predictable coat of pain akin to Universal’s previous animated films of The Grinch, where the formula dictates that there must be contemporary music and easy-to-spot pop culture references for kids to digest. For a family that’s all about divergence, they certainly fall right in line for this picture.

We’re treated to the origin of the Addams and it’s not that surprising or intricate. Gomez and Morticia are driven from their village soon after their wedding by people who don’t like monster-like people. They depart for New Jersey, happen upon an abandoned asylum, and happen upon an escaped mental patient who just happens to be Lurch. Thirteen years pass and they have their children of Wednesday and Pugsly. They’ve raised them in secrecy, though they seem so unfrazzled by the world around them it’s hard to believe them being that protective.

Anyway, as with the previous Addams Family movies, the entire first act is just a series of gags. Some are clever; a body chalk outline shows guts and Gomez’s favorite snack is apparently wet coffee grounds with a spoon. Some are lazy; Gomez kisses Morticia’s arm and says she’s like a cold fish, only to realize he’s kissing a cold fish...for some reason. There’s some joking about explosives and crossbows but never anything too grim.

I couldn’t help but think back to when Wednesday was in Addams Family Values and asked if she was at that age where she only had boys on the brain. Wednesday’s answer; “Homicide.” Wednesday doesn’t have boys on the brain but she does have a rebelliousness to venture outside her creepy home. Though the Addams try, they can’t shield their child from the dangers below their mountain home of the plastic-looking suburb, absurdly titled Assimilation. The entire town is run by the perky and sinister Margaux Needler. She’s an HGTV reality show host, uncaring single-mother, and voyeur/provocateur of the neighborhood, wielding her online gossip abilities to force the town against the Addams and their weird ways.

If this story sounds familiar, it’s because it feels like a standard Addams Family format but without the extra bite. Pugsly has a rite-of-passage sword performance that looks more like a dance than a battle. Many Addams relatives appear but all look almost as generic and bland as the yuppie townsfolk. And if you were hoping for a morbid ending of the villain befalling some ludicrously gruesome fate, I once more remind you of the kid gloves being placed on this film.

The characters have the familiar charm but only really come off like lukewarm revisions. It’s that Oscar Issac is bad as Gomez but he never really comes into his own as the character. Perhaps the only character that comes close to being his own thing is Nick Kroll as Fester which is not too surprising given Kroll knack for voices. No complaints from Allison Janney perfectly melding into the villain role. Oh, and you won’t be able to miss the guest spot of Snoop Dogg voicing Cousin It. How could you when the character’s arrival is announced with a Snoop song. Edited for families, of course. Remember, kid gloves.

The film is not without its merits in how the third act ties together the picture with a meaningful message about acceptance. It may be a little too on the nose with its themes of immigration and Margaux’s big-haired blonde and tan look but it’s clear this film isn’t going for subtlety. Everything ends on a weirdly pleasing note which wouldn’t be as weird if this weren’t the Addams Family. The final lines are perhaps the most telling of the film’s forgettable nature.