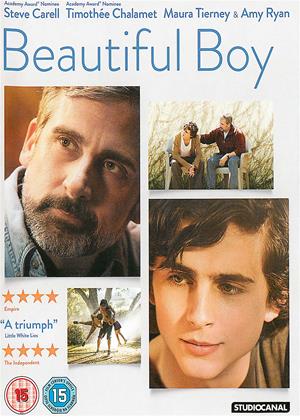 A hard, but terrific watch - Beautiful Boy review by AB

This is a hard watch, but the terrific performances of the lead actors lifts the film to very good. The scenario of drug addicted child getting clean then relapsing time after time must be horribly familiar to many parents. I found myself asking 'how would I have handled this?' if it were my child. Would I have handled it like Steve Carell in the film, even though I think his anger and accusations were unhelpful? Timothee Chalamet is excellent as the drug addicted son. Overall, a good watch, especially perhaps for older teens.

Carell and Chalamet are outstanding - Beautiful Boy review by TB

Both Steve Carell and Timothee Chalamet produce sensational performances in this deeply traumatic battle between a heavily drug addicted son and his desperate father.

I agree with other reviewers in that the film is a little dragged out but in a way this emphasis the concern and endless worrying that the parents were going through, which at times must have felt like every minute was an hour.

The fact this is based on a true story makes the film even more impactful and brings home the reality that sadly there are many families and people going through this same and awful struggle.

Set against a backdrop of a serene woodland home and chaotic/slightly nostalgic city scenes, this movie literally throws you into addiction time and time again. Near full track musical scoring gives you the sense of time passing linking the main characters (father and son).

Hope is repeatedly pulled from underneath you leavIng you craving more (echoing addiction?) and different family view points drain your sense of empathy, sympathy and an un nerving familiarity.

This movie throws your emotions around with your heart and brain feeling bashed and bruised, much like the central characters.

Watch it with someone, you’ll need a hug when the credits roll as the “beautiful boy” recites his favourite poem.

This film is worth watching for the amazing performances from Steve Carell and Timothee Chalamet, with a story line that was never going to be an easy sell.

Raw and deeply intense. Absolutely brilliantly acted out and based on a true story. Highly recommend!

A very unrealistic portrayal of drug abuse. Sickly sweet, shamelessly sentimental and mediocre. This one is drug-abuse lite, strictly for those people who have romanticised ideas about real life. Asides from one scene this has nothing to do with the grim, unrelenting reality of addiction. If you want the truth about addiction watch Nil By Mouth.

The storyline is not an uncommon one, obviously this was unlikely to be amusing and entertaining, for us there is a limit to how much self-indulgent pity we can enjoy, this film exceeded that, the final chapter should have come around an hour sooner.

On the plus side the acting is first class, small children included, the "Beautiful Boy" gives a stellar performance we hated him in no time.

The trailer looked great and I nearly went to watch at cinema but couldn’t go they’d taken it off so I was glad to receive this Blu-ray, but sadly I was disappointed I turned it off after 18 minutes I just could not get into it.

Beautiful Boy asks the tough question of how much we can both forgive and love. Though both feelings are powerful, they can shatter when facing off against the tougher storms of angst, addiction, and temptation. It’s a hard road and one that is not easy to traverse in a bittersweet contemplation on a family being broken.

The troubled teenage boy Nic (Timothée Chalamet) is going down a dark road. He has been taking drugs and his father David (Steve Carrell) is trying to find a way to fix this. David sends his son to rehab and checks him into a halfway house hoping to correct this issue. But treatment is tough for a teenager that keeps dipping out and going missing, before and after he is checked into the halfway house. The treatment seems to proceed but clouds of crystal meth and heroin continue to linger in Nic’s mind, later into his body. This leads to him displaying signs of being disturbed, scribbling horrifying illustrations and writings within a journal that David stumbles upon.

The film fluctuates in and out of Nic’s fits of recovery and tumbles, phasing between different eras. This sort of loose structure helps maintain a certain all-encompassing nature of understanding perspective. Within Nic’s mind is a yearning, an unexplainable urge for something more and shut out the world that he fears to accept. From David’s perspective, he’s reminded of when Nic was young. A father’s thoughts often linger to the past as the children grow older, only seeing the boy and not the man, hoping they’ll remain as free forever.

Okay, yes, this much is true, but the film hammers a lot of this home in unequal dosages. Flashbacks for communicating this harshness seems par for the course of a family drama and doesn’t really carry with it the weight one would hope for. On the otherside of the coin, the many exchanges between Carrell and Chalamet that don’t rely on tired theatrics are rather strong, especially a diner conversation that is so powerful it’s not surprisingly that nearly the whole scene was treated as a trailer for the promotion. A few scenes of these confrontations of David begging to be a source of help and Nic shoving him away are some of the best in the film. But then there are several scenes that shift in tone wildly, as when David pages through Nic’s journal in a manner that seems better suited for a horror film than a somber drama. Maybe if the film had took such a turn it could’ve been something more.

Despite some strong acting from the likes of Carrell and Chalamet, Beautiful Boy is a bit of a hamster wheel that merely spins through the same motions over and over. There may be a certain allure to the film’s repetitiveness in Nic’s constant divergence from others but it becomes an experience more tiring than intriguing, always wearing its drama a little more thin with every conversation. In many ways, the very scenario likens to the appeal of the story, where we question just how much we can endure the same bouts of tragedy before our attraction to the Oscar-bait performances lose their edge. My fascination peaked about an hour in as the picture kept taking its bows into watching how far one father-son relationship can go when bound in such simple scenes. And my heart can only go so far out for such tiring drama, even with such top talents behind the film.