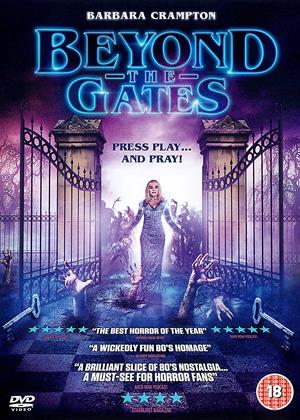 Reviews (2) of Beyond the Gates

Beyond Boredom - Beyond the Gates review by porky

Oh my goodness ,what an incredibly slow process it was getting to some story .... and then when it did appear it wasn't really worth the wait...It was one of those films where a day is about 5 minutes long and all of a sudden its night time again...so it carries a very small amount of story over days,weeks even ...

Who on Earth plays a board game with 3 people and throws the dice Once then talks about it for the next 24 hours before even approaching the game bard again let alone never throw the dice another time .......

Weak Story, Long wait for anything too happen and when it happens its not worth it.... you decide if that's an evening in front of a screen you want to spend . wasn't totally un-entertaining but boy did you have to wait for it . I was waaaay too frustrated with the movie to enjoy any entertainment it may have given ... maybe I should have walked off and paused it for 24 hours ever 5 mins , it might have made more sense .

Fun, trashy horror - Beyond the Gates review by 5PRX

It was the perfect evening film to watch after a long day at work. Mindless, occasionally gory with a paper thin, predictable plot. I loved it! The main characters absolutely in no way whatsoever were believably brothers. They didn't look alike and were completely wooden, but that was all part of the charm.

Beyond the Gates review by Adrijan Arsovski - Cinema Paradiso

Beyond the Gates is an excellent exercise in horror-turned-comedy, closely resembling and following along the lines of proven hits such as Hellraiser and Jumanji. In fact, when one comes to better think of it, Beyond the Gates is a mash-up of the two, although not quite like either of those particular movie-going experiences, but rather existing on a plane of its own. And so, looking the film from the aforementioned perspective, one cannot but wonder if Beyond the Gates could’ve been something more than what its budget allowed; or rather we should blame it all on its budgetary constraints instead ($300,000 in total). Whatever’s the case, Beyond the Gates is simply a creatively thought out idea, but one executed mediocre at best.

The film starts of by introducing the protagonists to the audience – each having enough (written) merit onto them to be at least partially interesting at first. And so, we have brothers Gordon (Graham Skipper) and John Hardesty (Chase Williamson), as well as the always curious Margot (Brea Grant) delving into an uncanny territory by unlocking what seems to be ancient evil trapped in an old VHS board game. Needless to say, what awaits on the other side can possibly have negative repercussions on these kids’ wellbeing and health (duh).

Fortunately for the audience and on the perils on everyone else: Beyond the Gates ends up being a nefarious game that sucks everyone into the “abyss” from which there’s hardly a way out. Not all is lost however, since there are certain set of rules that can set our characters free and make up for the stupidity on their part (as it’s the case with the majority of teenage horror flicks, this one not excluded).

Additionally, in regards to its story, Beyond the Gates pays homage to a number of older flicks in similar theme and subject, as well as board games, and other culture artifacts from the past century. Arguably, this is the film’s strongest point, since the narrative is developed in such a way as to not feel as amateurish as it ought to be; that is to say, Beyond the Gates is more than the creators bargained for, but ended up less than what the audience had hoped for.

In regards to the 80s, this film serves as a kind of a nod to that culture, expanding upon that same theme in a variety of different ways, including several references (which I would not mention in wakes of avoiding spoilers);

Finally, this feature by Jackson Stewart (penned by both that guy and Stephen Scarlata) is a perfectly watchable film, nothing more, nothing less; and to this extent, Beyond the Gates can provide some form of entertainment (granted you’re familiar with some elements of the ancient culture of both the eighties and nineties as well).