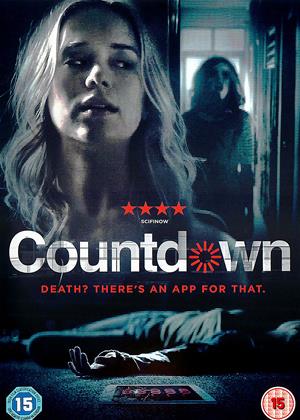 Well worth the watch if you like films like One Miss Call & The Final Destination Film Set I don't want to write to much about this movie but as i just wrote Rent it buy it my review is 10/10 and five stars a must watch my wife and I Enjoyed this movie & look forward to watching CountDown Two.

SPOILERS.... It isn't good to download certain apps, especially those that inform you when you are going to die. A nurse does this and is told that she has three days to live. She's haunted by a figure in black, her younger sister and her new boyfriend are also in danger, a randy doctor gets her suspended when she refuses him, a jokey priest is delighted to be taking on a Demon, and a deadpan phone-salesman/hacker with a dry sense of humour also tries to help. Elizabeth Lail is good in the role: intelligent, resourceful (attempting self-sacrifice to save her sister), and she reminds me of Emily Blunt. The film started promising in a similar vein to IT FOLLOWS, and included a bit of THE DEVIL RIDES OUT inside a protecting pentagram, but eventually relies on cliché jump-scares and a "Its not really over" ending, in case of a sequel. Despite the flaws I quite enjoyed it. ??

The very premise of Countdown gives off a Goosebumps vibe. No, wait, that’s an insult to Goosebumps. Think of a lesser known Goosebumps knock-off that took rejected scary-story ideas from R.L. Stein, slathered some marketing-approved notes all over it, and sprinkled it with a pinch of Twilight Zone thematics. The result is a film that feels quickly cobbled together to make mild horror out of the hip and happening hotness of...apps.

The titular phone application is said to be able to predict how long the user has left to live. From the reading that sentence, I fathom you’ve probably cocked your head, raised an eyebrow, and remark that this sounds familiar. You’ve most likely heard it as a device for tension in the likes of The I.T. Crowd or a quick gag in Futurama. And you’ve most likely heard the twist as well, that the user who takes peak notices they have not much time to live. Quite the scenario and one would think knowing this information that it could create a certain alluring tension. But damned if Countdown isn’t determined to make this idea flounder.

There’s at least an interesting start. A teenager tries out the app and her time of death is in three hours. Knowing this, she avoids getting into a car with her drunk boyfriend. However, she then receives notice that she has somehow broken the user agreement and is then killed by some strange force. So now we enter into some stranger version of Final Destination, minus that wickedly clever means of death. So, you know, a real low-rent version of Final Destination.

The central story focuses on Quinn Harris, a nurse who is fresh on the job and the target of sexual harassment. She runs across the teens and their death app, curious as to how accurate it is. Of course, Quinn and acquaintances soon take a look at their numbers and try to decipher what is going on while also breaking the user agreement. What they find out is a mix of conspiracy within the tech’s ratings and a demon by the name of Ozhin.

Now, of course, in order for any of this to work, huge leaps in logic must be taken. In essence, I kinda get what the filmmakers are going for here, providing a commentary on how carefree certain people are with apps that generate curiosity while at the same time commenting on how nobody reads user agreements when they really should. What if one of the items in that agreement is that the company can MURDER you!? And, yes, this bit has been done before as well. South Park, I believe, but there may be more.

These ideas peter out quickly, however, as the tension dissolves into the discovery of the demon and tinkering of its rules, the appeal evaporates. Supernatural horror always seemed the most intriguing when you didn’t quite know the rules. By the end of the picture, there’s bickering and a battle over death and sacrifice to please the demon and lift the curse. We more or less know the specifics of the user agreement as to the horror morphs into more of a procedural. All of it amounts to little more than a standard encounter with a strange demon, the bout most mild when paired with the technological twist of an app.

It’s not that the very premise for Countdown was doomed to fail but it’s an idea that needs to be given a little more thought before zipping straight to the supernatural horror mundanity. Perhaps with a little more thought and a lot more grit, this could’ve been a bit more than just the killer app movie that is known for little else. Even the left-field twist of, get this, Countdown 2.0 loading itself onto phones can’t save this picture from anything other than the expected.