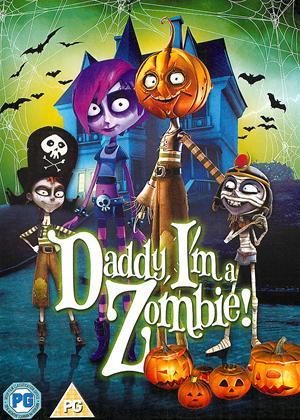 Reviews of Daddy, I'm a Zombie!

Dixie, the daughter of an undertaker falls pray to a prank played by the school bullies and, running off distraught into a storm, is killed by a freak accident – only to wake up as a zombie a short while later.

Deciding not to waste her after life Dixie joins up with two other zombies and rejoins the world of the living where she sets about righting the wrongs of the world and hoping to thwart the evil plans of other members of the living dead.

Obviously taking a great deal of influence from the stop-motion animation of Tim Burton and his ilk the Spanish language feature Daddy, I’m A Zombie looks promising on the surface but ultimately fails to deliver. The animation is perfectly adequate but lacks the personality of seminal pieces such as A Nightmare Before Christmas or the genuine darkness of Coraline. The story is also brimming with potential but simply doesn’t carry enough meat for any viewer, flesh eating or otherwise, to get their teeth into.

All in all Daddy, I’m A Zombie is reasonably enjoyable but hardly memorable; for fans of Burton’s classic film making style and that slightly quirky animation then this piece is a perfect option when you’ve nothing better to do, but I couldn’t go as far as to recommend it to anyone.