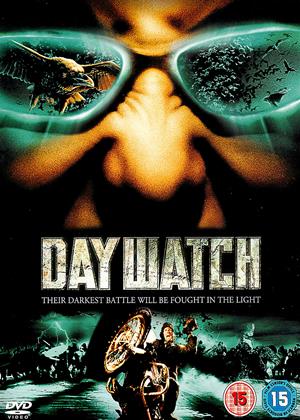 Daywatch - One To Miss On Your Watch!! - Day Watch review by CS

Trying very hard to be a kind of 'Matrix' with Vampire type characters, this is a very confusing and muddled affair. This is a Russian film, with English dubbing which works Ok. But sadly it tries to be very complex and clever, but instead ends up being very confusing and just plain boring. This has been made in an almost Japanese Anime style but with live action instead of cartoon. It probably would have worked with the script as it is if it had been Anime, but as live action the script just does not work. Also what's odd about this film is that all of the actors look like they worked for the KGB and are about that same age as well. Having a 50 year old bloke, pretending to be a 20 year old just does not work. So it's kind of out of place with so many things. Nice try, but not for UK consumption.

This movie is simply wonderful and even better than the first of this trilogy. I really have a big problem with how this film is often compared to the matrix as it really has nothing at all to do with that film. Its an "urban" fairy-tale, modern and contemporary but not Matrix-y!

Unlike so many hollywood stuff the viewer is not patronised with an easy to follow plot with nice "reminders" of what's happening. The story twists and turns and never stops moving for a moment. This film requires concentration and full commitment but you will be fully rewarded by the end or this 140min epic.

It starts almost immediately where the first film ended. You really need to see the first before this one but that just makes it better. This not just a different story with the same actors/location - its a true follow on.

My copy from Cinema Paradiso did NOT feature the wonderful subtitles that english people were provided for by the film makers. Buy the movie (or watch on the cinema) and you have amazing fully animated text like you've never seen before. It really adds to the film for those of us who can't speak Russian (!).

The fact this copy has just plain boring white tele-text style subs, was a huge disappointment for me.

I strongly recommend you DO NOT RENT THIS FILM for this reason - but buy it!

Got to agree with the positive review- “Day Watch” is an atmospheric treat, stuffed with great lines and wild action. Director Bekmambetov seems to have a freer hand here, having dealt with all the backstory in “Night Watch”,so he delivers a clearer, tighter story with all the usual supernatural malarkey, and in amongst it all there are affecting father/son stories, respect between the leaders of the two camps, and fascinating glimpses of the old and new Moscow. OK, so he wimps out on the possibilities of a gender-swap shower scene, but sex is perhaps the one thing that “Night/Day Watch” was never about.

Good fun Russian take on a Hollywood staple.1st movie broadly followed the book's plot. This one massively diverges, with only a couple of plot threads (chalk, relationships) that are in common. Having loved the book, that is frustrating, but my wife who hasn't read it really enjoyed it. To be fair the book meanders around life philosophy, communism vs. capitalism, and would be expensive to film properly in the multiple Russian locationse. I thought the 1st movie was more inventive, but given budget limitations they've made a fun, exciting and unpredictable slice of russian Hollywood. And just seeing the shabby side of Moscow, and Russian skewed view of Hollywood style entertainment, is fun. The books really are better than the movies.