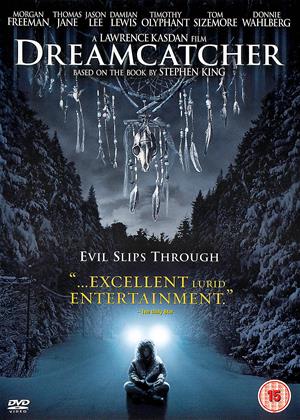 Seriously what is this rubbish? - Dreamcatcher review by em

I watched this film for about an hour. The first section was quite interesting and then SUDDENLY absolute codswallop. I have no idea whether this is true to the book and I don't care. Laughable acting, especially from Mr. Freeman. A complete waste of my time.

This sci-fi invasion film has many familiar Stephen King elements and although it's not a great film it does has some interesting and unique scenes. The main characters find themselves intertwined in matters of dangerous extraterrestrial creatures visiting Earth.

There are some tense moments with the alien creatures but because a lot of the film includes a comedic tone the gruesome horror isn't as hard hitting as a film like ALIEN or THE THING. This is still quite a dark film but has more intentional laughs than extreme scares.

The two people that are initially found in the woods provide MUCH humour, and the director finds new ways to give use the horror staples of fumbling in a critical situation, well done...

Also Morgan Freeman was actually able to provide some laughs too. Special effects are reasonable for the time, overall the film isn't too bad.

It also make you think about characters from other Stephen King films who have powers like 'shining' and how they got their powers...