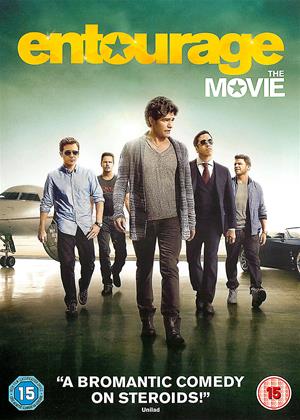 A Fairytale of success and excess - Entourage review by GJ

Critic Mark Kermode hated this movie and for the first 20 minutes i agreed wth him . These characters are reprehensible. All of them should be in Jail and when it looks like the chips are down for any of them , miraclulously they come out on top. Yet by the end of the movie you join in ( sort of ) with the implausible success . This isnt an accident . The TV series was the same . You have these five anti-heroes, stumbling around a very superficial wasteland where cars and party-goers move in slow motion . The credit goes to the writing and particularly the performances. The interplay is still sharp and the comedy still feels fresh. Time has passed since this film was released and some people appearing have had their own share of scandal. Its a fairytale from a very specific viewpoint - it is both insulting and embracing of its characters and their situations. Viewers who liked the series will probably like this movie but i dont think it will win over many converts.

Similar to HBO’s movie treatment for Sex and the City, the Entourage movie exists more as a multi-episode collection than an actual movie narrative. Aside from a larger budget to blow on bigger and more lavish locations, there isn’t much in this script to warrant a big screen treatment. This could have just as easily been an HBO TV special or miniseries to give the show a proper sendoff. But seeing as how that’s never been an option for HBO, here we are with the Entourage movie. And for being as episodically focused as it is, I have to admit that the movie does generate enough laughs for as overly meta and lewd as it tries to be.

We find the characters now older and richer (and thinner), seeking where they should go next with their lives. Leader of the fame train Vincent Chase (Adrian Grenier) wants to break from acting slightly to direct the next picture he stars in. The only way to make this happen is to rely on his old and angry pal Ari Gold (Jeremy Piven) who is now a studio head. As Vincent’s feet grow cold in post production while Ari’s head becomes aflame with tension, the rest of Vincent’s crew tag along on the production with their own problems. Vincent’s perverted brother Johnny “Drama” Chase (Kevin Dillon) is hoping that this film will finally launch his career and win him an accolade. Eric Murphy (Kevin Connolly) finds himself in a tight spot between women and trying to come to terms with the mother of his soon-to-be-born child. The slimmed down and wealthy Turtle (Jerry Ferrara) is hoping to finally settle with the right woman, but has an uphill battle with his new status.

In between all the nuggets of brotherly banter and rather vivid sex scenes, the movie becomes a cameo party with several celebrities gracing the screen as themselves. Bob Saget returns to hit on more young girls with her perverted behavior. Kelsey Grammer passes by Ari during therapy bitterly remarking about how ineffective it is for his mental health. Gary Busey pops up to ramble at any open ears with his strange rants and philosophies. Liam Neeson gives Ari the finger while passing in traffic (“Leave no jew behind, Schindler!”). Mark Wahlberg passes by Vincent in the halls with his crew mentioning how he is working on Ted 3 (“I’ll do 25 of them if they let me.”). Johnny Drama attempts to convince Jon Favreau to let him be in the next Iron Man film - despite Johnny clearly being older than Robert Downey. And on and on and on the guest stars go - every single one of them mocking their current careers. By my count there are about 34 cameos with enough meta humor to strangle any movie that dare tread down that path of comedy.

The only guest actors who don’t seem to be playing themselves are Billy Bob Thornton and Haley Joel Osment as the stereotypically southern investing father/son duo. Thornton is his usual quietly crass self the way he talks down to Ari who begs him for more production money, but it’s Osment who takes the cake as the simple-minded rich hick. Based on personal issues, he becomes the snotty antagonist demanding edits and cuts of several actors from Vincent’s film (including Vincent himself). He is playing up the spoiled rich boy just a little too much, but he’s suitable enough as the film’s villain to push the central conflict forward. Because, let's face it, every character here is pushed a tad too far on the Hollywood smug train that slightly derails off its satirical rails. The whole scenario is ridiculous male wish-fulfillment to be sure, quite similar to how Sex in the City was the female equal. They're both franchises with out-of-touch writing and characters, but I enjoyed the Entourage movie more considering I didn't have to see someone poop themselves or endure a gross-out pubic hair joke. The dialogue is dirty, but the gags are sanitary.

At only 104 minutes, creator/writer/director Doug Ellin does his best to cram as much content as he can - tightly edited to keep things moving. Perhaps too fast as the film jumps around rather quickly in time and seems to skip over more interesting areas. We hardly see any of the film Vincent is shooting entitled Hyde. From what we can gather from the brief clip that is shown, it’s a post apocalyptic setting involving future drugs, an army state and mutants. I know the footage of the film itself isn’t as important as the drama and comedy that surrounds it, but it boggles the mind how such a film could garner a Golden Globe nomination for acting. Entourage even skips right over the premiere of the film and goes straight to the Golden Globe ceremony with the whole crew in accolade-accepting garb.

For being so uneven with so many storylines coming and going, Entourage still manages to maintain its comedic effect as a self-aware satirical force on the Hollywood machine. There are a few dead areas where the comedy doesn’t quite hit as hard as it should, but there are still a handful of fairly big laughs throughout. Every moment Jeremy Piven is on screen as the loud and vicious Ari just made me smile at his over the top frustrations which he attempts to pull back from for his family. There’s just something so amusing about a man dealing with anger who eventually explodes by punching a portrait of a kitten. If something like that in addition to Ed O’Neill getting pissed about parking cracks a smile, Entourage can be an enjoyable ride for what it’s worth. But, seriously, a post apocalyptic movie about mutants receiving a Golden Globe nomination for acting? That seems far more surprising than the way all the characters sort of expected it with how much they praise Vincent’s work.