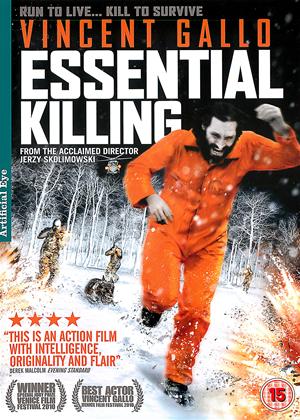 Excellent – but it’s the kind of film you’ll either love or hate. Me, I liked it very much.

It's ambiguous. There’s no dialogue. The countries in which it takes place are not identified. The nationality, identity and motivation of the central character are never stated: it’s a sort of blank canvas on which the viewer can set his own preferences – or perhaps that should be prejudices. It's only by reading the credits that you find that the central character is named Mohammed. If that sounds like the kind of film you may be interested in, read on.

The film opens in Afganistan? Iraq? where a party of one US serviceman + 2 civilians are exploring a canyon with a hand-held mine detector. An unnamed, unarmed observer watches them, picks up a rocket propelled grenade launcher from a dead man, and shoots. He runs, a helicopter gives chase, fires a rocket which fells and deafens him. He is captured, transferred to a Guantanamo Bay type facility, interrogated (but can’t hear as he is still deafened), shaved, shackled, hooded, orange-uniformed, waterboarded – you get the picture. But then things start to go wrong… He is in the process of being renditioned / transferred to some un-named apparently Eastern European location when the vehicle leaves the road and he is left alone and barefoot in a snow-covered wilderness in a foreign country. What follows is his attempt to escape this alien environment without food or proper clothing, chased by helicopters and men with dogs…

I found it gripping. It reminded me in some ways of 'The Grey' but with a great deal more realism. This is no Bourne-type story about a fugitive. It's not a Hollywood-type thriller - although it's thrilling.

As the film draws to its ambiguous ending the director seems to run out of ideas and the scenarios become less likely (examples: the lactating woman, and the mute woman who dresses the wounds). I enjoyed it - I'll give it 4/5 stars, but it's probably not a film for everyone.

Not a bad film, but it was kind of relentless. The subtitles did not work, but it was did not matter a great deal, as there is very little dialogue. Nicely shot, lacking in other aspects.

Essential Killing is the newest directortorial offering from Polish director Jerzy Skolimowski, best known for his movies The Shout (1978) and Four Nights with Anna (2008) which broke his almost 20 year dry-spell. The film is an intense political drama about an escaped detainee lost in an unfamiliar continent, determined to get home.

The film takes a brave stance in it’s depiction of war; remaining consistently vague as to where it is set and for which side the various characters are fighting. The unnamed lead character, played by Vincent Gallo is a terrorist prisoner of war transported from his desert home to an unknown European country where he escapes into the vast surrounding forest. He spends much of the film hunted by armed men in silhouetted black tanks that seem out of place in the picturesque European winterscape.

His journey is a tense and thrilling one, yet the film seems to refuse to allow you to become fully immersed in its world. It has an obscure surrealist quality to it, emphasized by the juxtaposing themes of nature and cold steel, winter and Eastern heat, fear and determination. The film manipulates the appearance of characters and places in such a way as to make one appear totally alien to the other, yet it does all this without a suggestion of blockbuster CGI.

Most notably, the film is almost entirely silent, with Gallo not speaking a single word throughout. This helps to add to the ambiguity of his identity which contributes to the film’s dreamlike sensualities. Whilst the harsh reality of the world he finds himself in compared to his inner state of starvation and delirium make this a highly emotional piece. However the abstract nature of the film does not let you become truly attached to the character, credited simply as “Mohammed”, and thus leaves your emotional senses feeling a little neglected, whilst you visual and mental states are so expertly stimulated.