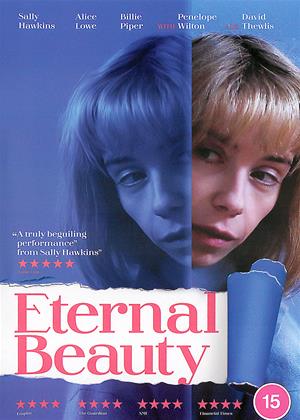 This brave, meticulously crafted piece is for the most part very successful at giving us an empathetic portrayal of schizophrenia. Most films about mental illness tend to use “normal” characters to provide an outside perspective on the subject’s illness, but instead Roberts lets Jane herself (superbly played by Sally Hawkins) be our guide, which has the result we are unable to differentiate between reality and delusion since she herself cannot do the same.

There's some dark humour en route, notably a Christmas present-giving scene involving thoroughly bemused relations, but on the whole it's a heartbreaking film, for Roberts doesn't attempt to shy away from the fact that Jane is a lost soul, trapped inside a mind walled off into sections between her present and past self / selves.

Sometimes the script isn't quite strong enough to cope with the sheer complexity of what's being shown, and the sections involving Jane's relationship with fellow psychiatric patient Mike are a bit awkward, but generally speaking this is strong stuff, and is all the better for not giving us a neat and tiny narrative arc or any sort of cathartic conclusion.

Its an empathetic and thoughtful portrait - Hawkins' character is not a victim: she has agency, intelligence and the ability to live a full life in spite of her condition. If anything, it's her family who are more of an impediment for her life although they are drawn very broadly - her deceiving sister (a sour Billie Piper) and her controlling mother (Penelope Wilton) in particular. Her other sister, played by Alice Lowe, is a shining beacon of love although is arguably also quite a two-dimensional character. Jane also suffers heartbreak from a man who jilted her at the alter.

Roberts borrows heavily from the visual styles of Wes Anderson and Michel Gondry here, which mostly works when depicting Jane's inner world although occasionally comes across as gilding the lily. But it does create a suitably jarring visual language to depict Jane's illness.

Although the shining star is Sally Hawkins, this flawed, offbeat look at mental illness is definitely worth a watch because of its thoughtfulness.

First thing this is really well low budget film. The script is decent and the subject matter dealt with in a very quirky way. The acting from Sally Hawkins is fantastic and makes you really feel for her.

The reason for giving this 2 stars is for me the film isnt a film I would choose to watch again. The story is quite quirky and nothing stands out.

So overall it's a well made and decently acted film but not sure I would say an instant classic.

Just couldn’t get along with this. Found it depressing and switched off after 20 minutes although Sally Hawkins is an amazingly good actress, this just wasn’t to my taste.

Super performances, particularly by Sally Hawkins, and an insight into mental health problems but didn't really hit a chord with me. Some sweet scenes, some quirky, some very sad and all, as I say, well done. Perhaps I was expecting something a little mystical as in 'The Shape of Water' but i can't say I enjoyed it.

Sadly, we had to give up on this film a third of the way through. A very strange plot with a very strange feel - in that sense, it probably perfectly captured the feeling of paranoid schizophrenia that was central to the idea of the film. Sally Hawkins put in an amazing performance, but I couldn't recommend this film. Disappointing.

I really tried to get into this film but it was far too depressing. Even though I understand how bad mental health problems can be I still found it too hard to deal with. Not one to watch in lockdown when you may already feel a bit low.

This film treads a difficult line between black comedy and enduring mental illness. Not the easiest trick to pull off, but it does it in a way that is both engaging and thoughtful. A great piece of work that stands out in the current sea of dross and ought to be seen by a larger audience than it will probably achieve. One for those who like the Mike Leigh genre.

This is a charming, thoughtful and slightly offbeat drama about one woman's mental illness. Sally Hawkins is Jane, a young woman who suffers from depression and schizophrenia following being stood up at the altar years before (Morfydd Clark plays her in flashbacks). The narrative guides us through Jane's life, a sort of tonal journey, where she hears voices including the fiancé who jilted her, and her bewilderment at the world around her especially her dysfunctional family including selfish sister Nicola (Billie Piper), her older sister and only real friend Alice (Alice Lowe) and her monster of a mother (Penelope Wilton). She almost finds some respite in a weird relationship with the bizarre Mike (David Thewlis). There's comedy, some of it laugh out loud, sadness and at times some real dread too as we are carried into Jane's inner world. Hawkins, who is always worth seeing in anything, is magnificent here and indeed the whole cast are excellent. The film's message that 'normal' may actually be quite boring is both funny and something to actually think about. Ultimately I found this quite a rewarding film and definitely one to check out.

My heart sank when I saw National Lottery funded and that the Welsh film industry (?) was involved. A TV drama slot would have been better for this really, not much life in it or movie craftmanship. A repetative 'she's bonkers' theme carries on with little development of it. Repetative and dull, it drags on. A movie has to be entertaining and this certainly isn't. The subject may be serious but so would a movie about gardening at my place.

The irish subsidised industry does a little better and let's not discuss the Australian attempts at film making. I turned this dross off after 40 minutes, I was in a state of depression having started Friday night off so badly!