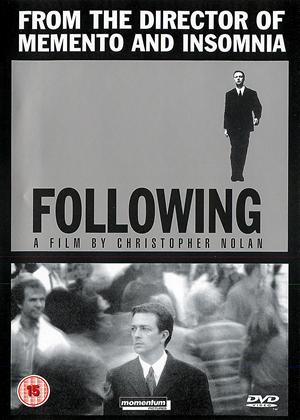 Never mind low budget, this is a 'no budget' film (well, £3,000) written and directed by Christopher Nolan in his student days. The same Christopher Nolan who went on to fame and fortune as the director of 'Memento', 'The Prestige', 'Inception', the 'Dark Knight' Batman trilogy, 'Man of Steel' etc.

It is excellent - really, really good despite the almost non-existent budget, using fellow students at UCL as actors, and shot on a 16mm wind-up Bolex camera. It already shows a maturity of direction and the use of a non-linear storyline that Nolan deploys in later films.

It tells the story of an unemployed young would-be writer who follows strangers in the hope that they will give him ideas for a novel. He allows himself to get too close to one, who involves him in a world of burglary. But he is (of course) being set up as a patsy...

This is perhaps the best film I have seen recently - well directed, well photographed, tightly written, well acted. Oh yes, and it's gripping.

Interesting and well worth watching - Following review by Plastic Teaspoon

The plot is a little contrived, but that is not such a big deal for a neo noir. Many noirs had much more contrived plots but were still great films. For such an extreme low budget film the quality of the final product is remarkable.

The storyline is patched together out of sequence and you do have to be on your toes to figure out what is going on. Well worth making the effort to do so though.

The worst thing about this film is the acting. Never good sometimes appalling. The best is the plot, building slowly through the eyes of a strange author (you think at first that he is just a creepy voyeur but it develops, have patience). The direction is good; that is what alerted me to the film, but I wouldn't say amazing. It is non-linear but that is about all. It is a B&W film with great lighting and photography. Overall a bit arty and definitely not main stream, but interesting.