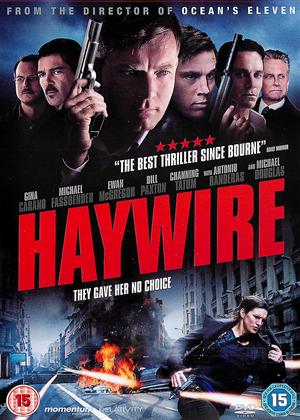 With Oscar-winning director Steve Soderberg and a cast including Michael Douglas, Antonio Banderas, Ewan McGregor, Michael Fassbender, this should be a good film - right? Wrong - it's complete, boring twaddle from beginning to end. And there isn't even an end - the film just stops.

The film appears to be a vehicle for female cage fighter Gina Carano who plays the role of sort-of-special-ops person Mallory Kane - and at least with her fighting background she brings a degree of realism to the fight scenes. Fighter she may be, but an actress she is not. Wooden acting, silly dialogue (it sounds as if her lines were all slowly dictated at a re-recording session after the filming was complete) - is there anything else wrong? Yes - the confusing storyline is the same old, same old one we have seen so many times before: double-crossed agent seeks revenge on those who have betrayed him (or her, in this case).

It's all very weak stuff and the better-known actors who have lent their names to this tripe have only bit parts. I'll give it 1/5 stars. One to avoid, I'm afraid.

From the prolific director Steven Soderbergh comes what at first sight looks like a run of the mill high octane action movie; any Soderbergh’s fan will tell you however that that’s just not how Steve does it.

For starters just take a look at the cast; Ewan McGregor, Michael Fassbender, Bill Paxton, Channing Tatum, Antonio Banderas and Michael Douglas, as if the promise of such an eclectic selection of some of Hollywood’s finest wasn’t enough there’s the appearance of ex American Gladiator Gina Carano as the leading lady. The world number 3 brings a sense of realism to the film that could only be brought out by someone with the talents of Soderbergh; where most action movies are plagued by a lack of story and an over indulgence on visual effects and over dramatic fight scenes, Haywire has a wince making realism that is due in large part to Soderbergh’s choice to cast Carano.

Beyond the painful but thrilling fights lies a complex espionage storyline that is challenging and intriguing: black ops solider takes revenge after she is betrayed and set up during a secret mission. This is no masterpiece however, the action will keep you on the edge of your seat but the narrative is a little bit weak.

Overall Haywire is better than most action movies, but as Soderbergh movies go it’s hardly a corker,