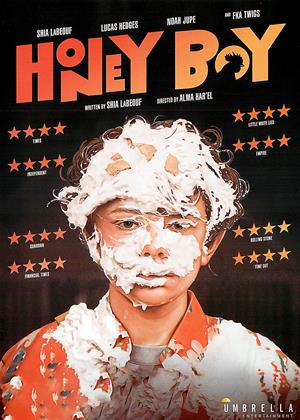 A heartfelt yet a bit self-indulgent semi-autobiographical drama written by Shia LaBeouf. He plays a version of his own father, a drug addicted, alcoholic army veteran in a story about his relationship with his child actor son played by Noah Jupe and Lucas Hedges. The film is told through the eyes of his son aged 12 and later aged 22 when he himself is forced into rehab after a drink driving accident. There's no doubt this is powerfully acted but it's a bleak story about a dysfunctional parent but ultimately I found the whole thing rather uninteresting.

There is one scene in Honey Boy that is by far representative of its heart and viciousness. A father and his boy of 12 years sitting on the curb, embracing each other. They are both smoking a cigarette. The father then tells him something about the world, that a seed must destroy itself in order to become a flower. He stresses that transformation is violent but the child seems content, clinging to the wisdom of his dad. It’s that tragic attraction that makes Honey Boy such an emotional rollercoaster of a picture that constantly fascinates in how terrible parenting becomes a bitter cycle.

We meet Otis Lort (Lucas Hedges) as an actor in conflict with two parts of his life. In 2005, he’s a movie star with a drinking problem and needs to attend therapy. In 1995, he’s a young actor (Noah Jupe) that is already getting into some bad habits with his short-fused and abusive father James (Shia LaBeouf), a former rodeo clown whose shattered dreams still haunt him. They have their moments of connecting but James remains so laser-focused on pushing Otis to his limits of being a great actor that he often forgets he is a child.

James is exactly the kind of abusive father that gets under the skin of any child placed in a tough situation. In one of the most uncomfortable moments, Otis becomes a telephone of sorts for relaying the information between his mother and father while they fight. Just when it seems like James wants to bury a hatchet in wanting to meet Otis’ new step-dad, he’ll quickly dig it right back up to get violent and aggressive with anyone. Though James is in therapy, it’s still not enough. What he has can’t ever be recovered from and the adult Otis wonders if he can ever escape such a downfall of a life in showbiz.

Honey Boy presents Otis’ life in a stream of nonlinear moments that force him to make tough realizations. In 2005, he’s batting back and forth on his memories and about how lucid he is in the present. In 1995, he’s trying to see past all the evil in his father in hopes that he’ll find love. All that love, however, only comes on the stage and from another actor. In a heartbreaking moment, Otis slips out of reality and imagines his father being comforting that he’ll say he loves his boy. That’s not James though. The real James flicks cigarettes at his child and smacks him across the face. By the time Otis associates with a prostitute, James realizes how little grip he has on his son and tightens it to the point of choking.

Though very hard to watch at times, this is an exceptionally important picture that stresses not only how a troubled relationship with family can be harmful but must be recognized as well. Otis will not grow better by burying thoughts of being beaten in a hotel room or spoken of lowly for his genitals by his own father. He needs to come to terms with this and not view the past through rose-colored glasses, as tempting as those may be to slap on in the dirty and depressing present.

With some of the finest performances from the likes of Hedges and LaBeouf, Honey Boy is a powerful bit of a drama that takes its time more to get to the center of a boy’s troubled life than the movies he was tossed towards. A lot of media surrounding fathers and sons often portray the children as having to better connect with their parents to mend the bond. Honey Boy suggests that it’s not always their fault and that sometimes a terrible life is the doing of their parents.