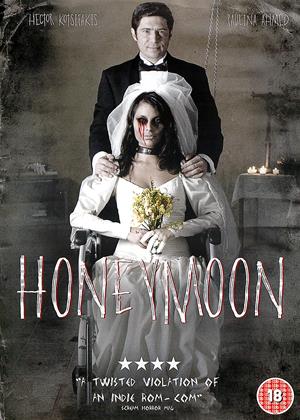 We’ve all been attracted to an unattainable someone. It can’t just be me. Jorge (Hector Kotsifakis) is likeable, presentable, respectable and lonely. He spies local girl Isabel (Paulina Ahmed) and contrives to continually run into her in shops, while she is out jogging etc. We’re not sure whether she has been made aware of him or not, but there is a hint of knowing in her eyes as he attracts her attention once again, this time whilst pretending to tend to his car.

Sadly, it is too late by then, for pretty soon she has been tranquilised and tied to a chair in his cellar, miles from where anyone can hear her screams. As you may imagine, she goes through several humiliations as Jorge’s spiralling instability continues to make itself known. Apparently while filming, Ahmed would remain tied to the chair between takes, so as to allow her performance a sense of reality.

Jorge is at odds with most horror madmen. He is perfectly calm and composed virtually throughout. Even his attempted suicide attempt is approached without fanfare. Yet Isabel’s ordeal becomes ever more tortuous and is difficult to watch. As an audience, we are willing her on to gain revenge.

Even I am not going to spoiler the outcome of this. It could be said that reading up the DVD packaging etc, or IMDB tells you all you need to know about the kind of film this is, but it is played so realistically (with Ahmed in particular turning in a powerhouse performance) and events are staged so methodically by Director Diego Cohen that what emerges is wince-inducing and compelling.