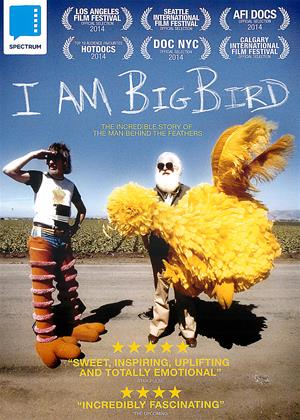 Rent other films like I Am Big Bird: The Caroll Spinney Story

Reviews of I Am Big Bird: The Caroll Spinney Story

There’s a certain magic to the presence of Big Bird that you almost don’t want to know about the man behind the feathers. He’s a character so beloved and well-known for his gentleness and charm that deconstructing him down to a human being destroys the ever-lasting image. But what’s most surprising about this biographical picture on the Sesame Street staple is that when Caroll Spinney takes off the suit, he’s still very much the same soul as Big Bird. It is not just an act - Caroll really is a man of great warmth and tenderness whether he is in or out of yellow feathers.

Of course, Spinney’s life is no fairy tale. His dad was quite abusive, he faced divorce after the birth of his daughter and suicide had crossed his mind more than once. When first starting out with Jim Henson, he was a terrible puppeteer when it came to rhythm. And yet he never sunk down to the darker level of booze or drugs. He was too good to bury himself in such vices. By the time he’d spent an entire season playing Big Bird, however, he had found his calling. He ultimately wanted to take his puppetry towards a direction of importance and found it with a character that kids could easily relate towards. With his childlike tone and curiosity, Big Bird became the big yellow symbol for the popular PBS program.

Spinney’s puppetry also carries a bit of duality in his emotions the way he also puppets Oscar the Grouch. Whereas Big Bird was gentle and kind, Oscar was the bitter and devilish persona in his fondness for garbage. In his own words, “when I’m terrible I feel great and when I’m great I feel terrible.” While Oscar was never outright evil, he did provide a proper outlet for Spinney’s more cackling side. He represented a monster who wanted to be seen as disgusting, but ultimately has a good heart he cares not to display. Perhaps it’s how Caroll outwardly perceives himself in that he believes he’s not good enough when in fact he’s a puppeteering genius.

This documentary directed by Dave LaMattina and Chad N. Walker covers a hefty portion of Spinney’s career. From his humble beginnings on Bozo to his on-location shoot in China, nothing important feels left out. The most heartbreaking moments of his career are trotted out to display Spinney’s attachment to the character. Be it comprehending Mr. Hooper’s death or singing at Jim Henson’s funeral, you can really sense the tears behind the suit. When Big Bird appears choked up, it’s not Spinney acting - that’s the real Spinney.

For all the pain Spinney faces - including the destruction of his suit and nearly being on the disastrous launch of the Challenger rocket - he still appears to have found a great life with his second wife. In between his constant hard work on Sesame Street, he finds himself drawing and painting as a very fulfilling hobby. His children love him despite his constant work and he even came to terms with his father. He even finds a suitable apprentice to take the reigns and is quite ecstatic about him being the right man for Big Bird.

The interviews and B-roll showcased make for a grand presentation. There’s a plethora of archival footage which finds Jim Henson, Frank Oz and Caroll Spinney having a bit of fun while they work behind the scenes. There’s an equal amount of interviews with everyone from Spinney’s family - from cast members, to executives. The sections without archival footage are lovingly animated in a retro style to illustrate what Spinney went through during his career. The most unique, of course, being an illustrated diagram of what being in the Big Bird suit is like. It may sound daunting to play a character where your only eyes are a mobile television monitor strapped to your chest, but I’m willing to bet there’s much better airflow in that suit compared to others. Just take a look at a scene where Spinney is ready to go while the puppeteers for Snuffleupagus require fanning while inside the thick suit.

I Am Big Bird celebrates one the hardest working Sesame Street actors with all the joy, pain and hardship that came with such a title. And while it is still a bit of a shock to pull down the curtain on such a classic icon, it’s comforting to know that the man behind the feathery curtain is just as kind as the bird he portrays. When shooting in China, Spinney ended up working with the cutest little girl who loved Big Bird more than anyone. Decades later, she finds herself reunited with Spinney for the first time. She is overjoyed to be with Spinney once again, not Big Bird. To her, they are both the same person.