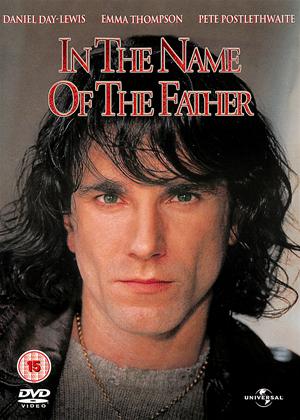 Reviews (2) of In the Name of the Father

Decent film - In the Name of the Father review by TH

Day Lewis is a revelation in the lead role and the story is hard hitting. This will stay with you after the credit roles on misjustice and the attempts society can go to in order to cover up their own crimes.

Voodoo child (slight return) by Jimi Hendrix blasts out as Gerry Conlon (D D Lewis) strips lead from a roof. Mistaken for a sniper by the British army they try to shoot him, miss, and Gerry flees for his life with the army hot in pursuit. This early scene is fantastic and shows how the Irish people rally around to take care of their brethren.

The IRA are fed up of Gerry's continuous antics and threaten to blow his knee caps off. Gerry's father turns up and the IRA give the young rascal a final warning.

So Gerry heads for England to get out of the dangerous situation in Northern Ireland. Once on the mainland Gerry just lives it up in a hippy commune, getting high and looking for the easy buck, which includes burglary.

Following the Guilford bombing Gerry and his Irish friends are fingered for the crime. His arrest prompts his father and other family members to come from Ireland to support Gerry.

What follows is quite unbelievable. No spoilers here, but it's jaw dropping stuff that lead to the convictions of all.

Gerry's father engages the lawyer Emma Thompson to prove his innocence. Gerry trusts no English people, period and at first doesn't want to know. A turning point comes for Gerry when he says to Thompson , "they fouled the ball". An important statement that has a double meaning, ie, he accepts the lawyers help, and secondly it's an admittance that his father was right about things (as you will get when you watch). So Thompson goes about her business trying to prove his innocence through police corruption.

Outstanding performances from Lewis, Postlethwaite and Thompson make this a cracking film.