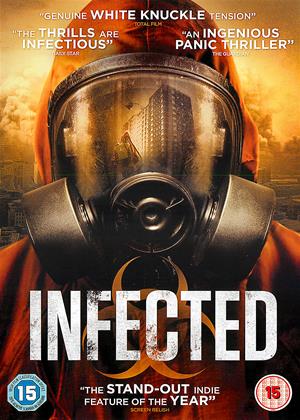 If waking up one morning and finding the tower block in which you live, and those around it, have been sealed - and that you have no water and no electricity isn’t bad enough - the gang that Mark (terrific Lee Ross) finds himself lumbered with is unsettling indeed.

Abrasive neighbour Sergei, who talks like he thinks he is a gangster, breaks down the wall into Mark’s apartment (“Strengff in numbers!”), chain smoking bigot Enid (Sheila Reid), and sanctimonious nerdy twerp Aiden (William Postlethwaite) make up the motley bunch caught up in whatever maelstrom it is that has made people prisoners in their homes.

The enemy appear to be people in sealed orange overalls. There has been a virus epidemic, and the government are keen to contain it. Enid thinks it might be something to do with immigrants and is treated as if the idea is abhorrent and unacceptable; Mark is called a ‘sick b*****d’ for trying to help young, mute Nicu (Gabriel Senu) – two very topical reactions for modern times.

In the end we are fairly sure that Nicu is the only one to survive from the clan. Indeed, mute children like him have perhaps been ‘spared’ by the authorities for being unable to tell others about the outbreak – that is the only supposition I can come up with as to why a truckload of non-communicative minors are being taken to safety. But presumably they can communicate in others ways. Unless they are being kept in containment by a Government body – in which case, it doesn’t matter if they can communicate or not, surely? The ending – such a major part of this or any other film – is confusing, and I can only imagine the producers left it that way deliberately. Some clarity would have been nice.

Watching stupid people being stupid is never less than truthful, and yet ‘Containment’ doesn’t quite have a strong enough storyline to make such a side-line hugely interesting. What begins as a fascinating scenario and study into human relations in the most extreme circumstances sadly soon becomes a less interesting run-around featuring mostly unengaging characters.