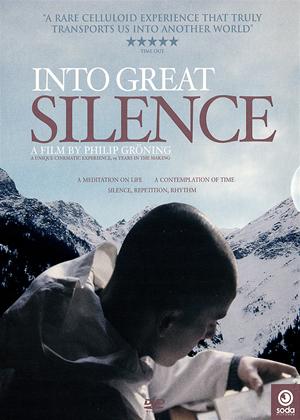 Synopsis:
Into Great Silence is the phenomenal box office smash hit about life inside the Grande Chartreuse that has opened to rapturous acclaim across the Western World. The director, Philip Groning, made his request 19 years ago to film inside the monastery where the last photos taken were in 1960, only to be told that it was 'too early' that maybe in 10 or 15 years... Eventually, as a result of this long standing and trusted relationship between the Film Director and the General Prior, permission to film was granted.
Into Great Silence is a very strict, next to silent documentary on monastic life with no music except the chants in the monastery, no interviews and no commentaries and is the first feature to document life inside the mother house of the legendary Carthusian Order in the French Alps. The viewer is invited to watch the films as part of a meditative experience where the film becomes the monastery rather than depicting one. A film for those who want to embrace awareness, absolute presence and to contemplate the life of men who have devoted themselves to God in the purest form.
Directors:
Philip Groening
Aka:
Die große Stille
Studio:
Soda Pictures
Genres:
Documentary, Special Interest
Countries:
France, Documentary, Special Interest
Awards:

Reviews (3) of Into Great Silence

Heavy going - Into Great Silence review by Tim from London

I know this film is highly aclaimed but I found it really hard work. It is basically a documetary observing the life and rituals inside the Grande Chartreuse. As the title suggests the film is very silent - with no music (apart from the monks chanting) and few words - in fact the first spoken words come no less than twenty five minutes into the film. The camera keeps a respectful distance throughout and observes long scenes of prayer and worship - and there are some wonderful shots of the surrounding scenery. But at two and a half hours I found this film really heavy going.

It has to be crystal clear before viewing this that it is about a French monastery where silence is the general rule. With this expectation it is a sensational film, brimming with such intense devotion and spirituality that even an atheist was moved. The film has many 8 second scenes depicting the soulful lives within the monastery, which once truly immersed, are in fact not long enough. It is definitely not a film for dipping into. All or nothing. It lived with me for many days and makes me calm whenever I remember it.

If you like the films of Angelopoulos or Tarr; or if you like the Renaissance masters of light and shadow such as Vermeer, De La Tour and El Greco, then you'll probably love 'Into Great Silence'. The photography and imagery are of the highest possible order. And, when added to that, there is an engrossing look through the window onto a group of people whose lives and lifestyles are a thousand miles away from the push and rush of modern western society; then I for one found the running time of nigh on three hours drift by with ease.

The film offers no history of place, individuals or the denomination. There are no explanations given. (Why are there seemingly so few monks in such an enormous complex of buildings? The occasional intertitles appear to bear little relevance to what follows). The meditative, contemplative atmosphere of the monastery is captured by long, silent shots of cloisters, candles, gardens, monks at prayer, the unhurried work of the lay brothers. The one regular, exterior sign of a 21st Century universe is a jet silently streaming across the sky.

I began by wondering by what journey did each monk arrive at the monastery, but realised this was missing the point. Each man must relinquish his character, his individuality, along with all earthly possessions. When a novice is introduced, each monk flicks back his hood to greet his new colleague, then pulls the hood up, as if to retreat into anonymity. A monk will flick his hood back to read a lesson, then pull it up when finished.

I am not praising this film as a Christian, or someone who approves of the religious life in any way. I'm a dyed-in-the-wool athiest. But I found myself supporting these monks. They choose to do no harm to anybody - or anything for that matter, as Carthusians do not eat meat. If you want to play devil's advocate you might ask what these people, in their cells for most of the day, are contributing to society. The response could be that the vast majority of people, no matter how unwittingly, are responsible for enormous damage to the environment. These monks are responsible for very, very little. That's contribution enough, surely. It's the kind of life I've often thought I'd like to live - except for the religious bit. A plausibly substantial sticking point.

At the end of the film I was left wondering whether, when the rest of humanity has blown itself to smithereens, there will still be monks in the Grande Chartreuse, pondering on the Infinity.