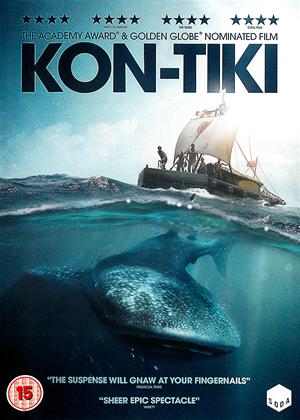 When I were but a lad, everyone knew of the amazing 1947 journey from S. America westwards to the S. Pacific islands by Thor Heyerdahl on a balsa-wood raft. I suspect that this knowledge is fading into history, so it's good to have fresh life breathed into the epic tale.

Beautifully photographed, the film tells the story from Thor Heyerdahl and his wife developing the theory, through fundraising, the selection of a crew, building the raft and the trials of the voyage.

But unfortunately, despite this film having been nominated for the 2013 Oscar for 'Best Foreign Language Film' only to be beaten by the excellent 'Amour', it has not (February 2014) been released in the UK, either in cinemas or on disc. And that's a real pity - the film is excellent. It also means that a rental copy is not available from Cinema Paradiso...

Unusually, the film was made in both Norwegian and English, each scene apparently shot first in one language then the other. A copy is fairly easy to track down - there are PAL Region 2 versions available in spoken English and with German, Dutch or Spanish subtitles, and you can buy them via Amazon, with a little bit of digging. However, beware the NTSC Region 1 version which has been significantly shortened. I chose to buy an Australian Region 4 version that has spoken English and English subtitles on eBay.

This is a magnificent adventure story - see it on the biggest screen you can. 5/5 stars - highly recommended.

[Aside: Yes, 'Amour' did deserve the Oscar - I rated that film as 5/5, as I did 'A Royal Affair' which was also a contender. All are different; all are excellent in their own right]

In the 1970s Thor Heyerdahl's heroic crossing of the eastern Pacific on a balsa raft was common knowledge and often mentioned. I have not heard of it since. This film might appeal to youths with a sense of adventure or 50s + who remember some fuss about it many years ago. There are some heart stopping moments of drama during their crossing and a real sense of desperate tension as they float in the massive ocean. Not a blockbuster by any stetch of the imagination but good clean fun. Shame it was given a 15 rating I think that was a bit harsh, it has cut off some of the most appreciative spectators.

Yes, the Kon-tiki expedition was a feat of daring archeology that set out to prove that the Peruvians could have sailed to the Pacific Islands. In real life this was a daring adventure - the problem is, as a cinematic adventure, it is about a bunch of guys stuck on a raft in the middle of the ocean without much to say or do. The uneventfulness of their journey is reveal in glorious 1080p 24 frames per second technicolour. A documentary would probably make more sense as the folk involved could describe the obstacles and how they surmounted them. Instead we get a blow by blow account which doesn't reveal much more about the journey apart from the fact that getting stuck out in the ocean for weeks on end is boring.

Good film but murder the fish! - Kon-Tiki review by TS

I like the film but I don't like that they brutally murder a Great White and harpoon a beautiful Whale Shark.

Based on a true story, this film is beautiful to look at with some great set pieces. We found the story to be absorbing, well acted and well balanced. Disagree with the previous review that this is a boring film. Yes it is about 6 men on a raft, but it is not about action set pieces, though it does have some excellent small moments of action. It is about the hunt for understanding our planet, the history of it and the drive for knowledge. Highly recommended.

Everything about a film you need. Class script, filming, acting and all based on a true story. Awesome.