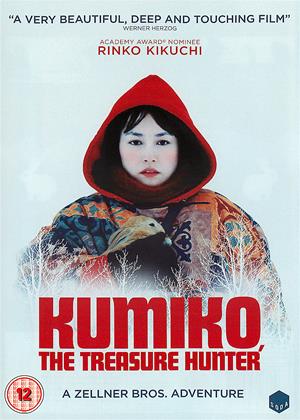 Reviews (1) of Kumiko, the Treasure Hunter

This is a really fascinating movie. It's a mystery really and/or a study of mental illness.

It's written by two American writers who also produced and directed, and the second half is set in the US.

It really is an enigma and compulsive viewing.

Beautifully filmed and well-acted, not to mention well-written.

It also has a brilliant soundtrack by The Octopus Project.

Watch this and be amazed.

The words “Based on a True Story” tacked onto a movie should be taken with a grain of salt. Thanks to years of in-class discussions on biographical movies, it’s clear that the word based does not always translate to accurate. Movies, even those based on real life people and events, are meant more to entertain and evoke emotion than provide all the facts. But for the poor and delusional Kumiko, she takes those words to heart as if the movies are speaking directly to her. She watches one particular movie as a calling for adventure. And, as her crazy goose chase progressed, I wanted her to succeed.

The movie in question is the 1996 dark comedy classic Fargo. When Kumiko isn’t coasting through her dreary job or talking to her condescending mother over the phone, she studies Fargo from a VHS tape she discovered in a cave. Her primary focus is on the scene where a suitcase of money is buried in the snow. She pauses and rewinds every shot of the scene. She sketches out a drawing of the fence. She measures its distance by tracing over the television screen. With nothing interesting or promising for her life in Japan, Kumiko goes AWOL to Minnesota, hoping to find the undiscovered treasure she believes is waiting for her.

Much like what the Coen brothers did with Fargo, director David Zellner gives the audience a reason to both laugh and sympathize with Kumiko’s plight. She’s very crazy in how she doesn’t do any research on the faux story of Fargo and abandons her life in every way. But there’s a bit of an understanding in how the prospect of treasure hunting trumps the lifestyle of an office worker looked down upon by both her boss and mother. Her emotions run deep in her obsession the way she breaks down into tears when the VCR eats her tape. When she decides to set her pet rabbit free to leave Japan, it’s not an easy choice for her. Kumiko leaves her dog on the train and wells up as she watches it depart without her.

Rinko Kikuchi plays the titular role with both a cute innocence and an intriguing psychosis. She’s so very dedicated to this quest that you have to admire her spirit, even if it means stealing from others and running out on bills. She commits such thefts not with a ruthless cackle, but a quiet escape. She doesn’t flee so much as she drifts off further and further to his snow destination. The changing of location shifts the tone drastically for the strange girl. In Tokyo, she is dreary and tired of the society that looks down on her. In Minnesota, she is bewildered by the kindly spirit of that stereotypical Minnesota Nice spirit. A religious group at the airport point Kumiko towards Fargo. An elderly woman of a rural area takes her in for the night and even offers to drive her to the Mall of America. Even the hotel clerk doesn’t seem all that enraged at Kumiko’s stolen credit card being declined. And when a Minnesotan finally has the guts to tell Kumiko that the events of Fargo are not true, he breaks it to her gently. Such news causes Kumiko to run off in tears of disbelief.

This would be the part of the review where I, a Minnesotan, would rip into the film’s depiction of the state. There’s no hamming of accents or mentions of lutefisk, but there is an awful lot of smiling and warm souls that Kumiko encounters traveling through the north. Its minor complaint given that this is a rather strange tale with its own quirks, but I would have liked to have seen more of a shock for arriving in Minnesota. Fargo depicts most of the Minnesotans as kind and humble people who treat every sentence with a grin and an “oh yah.” What if Kumiko bought into this Minnesota Nice and arrived to find not so much? It would make her journey more challenging as she continues to shut out reality for her end goal.

Kumiko, The Treasure Hunter is very weird, but weird enough to be both lovable and amusing for its deeply flawed protagonist. The settings of both Tokyo and Minnesota are beautifully shot as contrasting worlds. The direction by Zellner finds a unique balance with its quiet moments of both dark humor and painful choices. But, most importantly, Rinko Kikuchi performance held my attention throughout as a perplexing puzzle of a flawed woman seeking more. The ending is rather ambiguous about whether or not she finds the treasure, but Kumiko is just so adorably hopeless in her determination that I really hoped she walked away with the suitcase. And, yet, I can’t help but laugh at what such a character would think of the Fargo TV series which also features the suitcase of money in a different scenario. More research may be needed for that discovery.