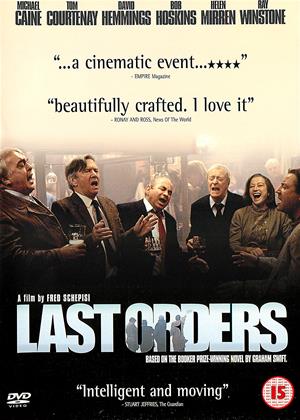 Synopsis:
Jack Dodds (Michael Caine) was a regular guy, so why the strange last order to have his ashes thrown off the pier at Margate? And why did his wife Amy (Helen Mirren) refuse to do it? As their Mercedes speeds towards the sea, an emotional mystery unfolds, where the men try to understand Jack's death by reliving their life through him...the war, the children, the good times and the bad. The journey becomes a pub crawl full of drink-ups and punch-ups and the men discover that through it all, it's your friends who break your heart...and your friends who mend it.
Actors:
Michael Caine, Bob Hoskins, Tom Courtenay, David Hemmings, Helen Mirren, Ray Winstone, JJ Feild, Cameron Fitch, Nolan Hemmings, Anatol Yusef, Kelly Reilly, Stephen McCole, George Innes, Laura Morelli, Sally Hurst, Denise Black, Sue James, Meg Wynn Owen, Kitty Leigh, Alex Reid
Directors:
Fred Schepisi
Producers:
Elisabeth Robinson, Fred Schepisi
Writers:
Graham Swift, Fred Schepisi
Studio:
Metrodome
Genres:
Drama

There are 2 really bad things about this film: a terrible soundtrack of the sort of music one may see on some 4th rate corporate training video, and secondly, the fact there are no subtitles on the DVD!

Otherwise, I loved this film. Great acting from great actors (Michael Caine, Tom Courtenay, the late David Hemmings and the late Bob Hoskins plus Helen Mirren) illuminates a slice of social history as we see how people's lives were affected by events and attitudes of the 20th century.

What's more, it is just about the only film I know to feature Margate, Chatham and Rochester.

This is a film to wallow in and contemplate; if you want fast paced plotting, this is not for you.

But I loved it. Such a shame the music is so rubbish. So glad this film avoided what would happen these days, especially at the hands of the pc BBC (unnecessary female characters and storylines tagged on; loads of token black and Asian characters to up to diversity quotient).

Good old-fashioned film-making and none the worse for that - and it's from a best-selling award-winning novel.

Ditto about the lack of subtitles, especially as the accents were so authentic and sometimes hard to hear.  Couldn’t help thinking Ray Winston was miscast because he was supposed to be  a generation younger than the rest but looked the same sort of age.  At the same time he was probably  more accurately cast and a product of the place.